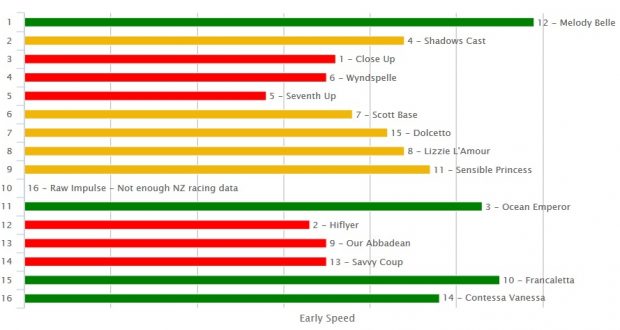 Heads Up below with a preview of two races, the Money Shot’s two best sports bets plus a chance to win a $20 multi

With improving Dead tracks at both NZ venues tomorrow, I’m looking forward to doing the form. This weekend, the emphasis will be on horses mapped to get winning runs (Like Melody Belle in the above speed map)  that are well placed to win. As we saw at Hastings last week, no off pace runners won, and with New Plymouth back to the rail being true, that same scenario is very likely to repeat itself as we saw the last time the rail was true there. Avondale with the rail in the true position, is also likely to play on speed, so knowing where runners are likely to settle in the running is going to be a vital part of the form puzzle. I’ll be adding the speed maps for most races, courtesy of Formpro Ratings, to help you see for yourself where runners are likely to be in the running. Plus I’ll mention the likely tempo and which runners will be suited by it. There is some great racing in Australia too, so I’ll be searching for similarly well placed runners.

The early preview will be posted by 1 p.m. and an update by 5 p.m. along with Heads Up where the Money Shot, who nailed both sports bets last week, and I will be previewing two races, plus much more.