With fine days at both Rotorua and Ashburton, a good day of racing is in store. Caulfield has some great fields and i’ll post an update for there by 12.30 p.m.

Some tricky races today but some nice value bets here and in Australia. Xpression does look the bet of the day and I’d be surprised if the $1.90 lengthens. 10.Sacred Quartz is a very good horse and should win the first at Ashburton but $1.45 FF is hard to take, but a multi into Xpression would make it healthier. Kings Will Dream looks perfectly placed from the Weir stable to win the Caulfield Cup. Right Or Wrong is set to peak in the last at Randwick. Star Treasure is the interesting runner for me. The speed map sets up perfectly for him and he looks back to somewhere near his best in the trial which should be good enough to beat these. The money for him says so anyway. Power O’Hata looks set to win but there isn’t much value in her at $2.90 and I rate her a $2.60 chance. Maygrove and Love Affair, with good runs, can both win.

I’ll post an update by 12.30 p.m. with any head to heads, suggested quaddies and other bets.

5.Right or Wrong has been hitting the line with more in the tank over 1200m. The last in very good time and closing sectionals. He’s won 3 from 4 on Soft tracks and 1400m is perfect fourth up. Jason Collett will suit him and he looks a strong chance mapping to get a winning run. RP $3.50, $5.50 FF

14.Kings Will Dream ran the ideal lead up for this when third to Winx in the Turnbull over 2000m. Bit one paced late but that is because this 2400m race has been his target all along. Drops to 53 kgs and has won 6 from 12. He has won over 2400m in good time and Darren Weir has aimed him at this. Maps to get a winning run which makes all the difference in these big races. RP $4, $5.50 Ff

18.Youngstar almost beat Winx last start. Won the Queensland Oaks 2200m and flew late in the Derby there over 2200m 14 days later. Chris Waller trained and on 51.5kgs has to be the main danger.

3.Xpression pushed the top filly Avantage last start. The step to 1400m is ideal and she will settle in the last three, and with an even tempo likely, she should just be too good for these. RP $1.40, $1.80 FF

The speed map shows Bolt from the Blue, lady Lira and Bocce all looking to lead with a moderate tempo once they get into position.

Confidence: 2/5 in a small but tricky race.

2.Bolt From the Blue won easily on debut left handed and layout at Tauranga right handed but was only run down late. Drawn to lead again and back left handed, will be harder to run down and fitter.

5.Media Sensation  ran home well after a slow start fresh. Will have to work to get 2nd outer or lead so maybe vulnerable late unless she snags and could get beaten by a sprint home.

7.Beam Of Light  if they go hard, could swamp them

The speed map shows Sellwood and Power O’Hata to lead out with Donna Anne Billy looking to slide over but is in danger being caught 3 wide on the pace. Even tempo likely.

6.Terra Sancta won three in Queensland and ran home strongly late in her recent trial. Maps to get 3 back inner or worse so needs luck.

4.Bella Court nice mare but likely to need one or two runs before she can be backed with confidence.

The speed map shows Bangles and Walkin’ By going forward early with a few likely to look to tuck in behind those. A moderate tempo is likely.

1.Pitch and Switch looked good last campaign and is ready to go fresh up based on her good trial win.

4.Savette is a nice mare and ran a strong second here fresh up. Needs a bit of luck from the draw but can place.

10.Walkin’ By drawn to get a good run on the pace and place.

The speed map shows Cowboys Don’t Cry can slide to the lead or sit outside Captain Orange and a moderate to even tempo likely suiting runners in the first half of the field.

12.Lucky Dreamer was a close second in a bit of a sprint home last start. That was her first run third up over ground so will have improved off that. She maps to get a cosy run behind the leaders and 1950m looks ideal. RP $6, $9.80 FF

6.Jimmy Rocket ran a solid 4th last start after running out of room late. He looks ready to peak third up. Awkward draw though.

3.Cowboys Don’t Cry won in faster time than the R65 race the same day and is likely to get 2nd outer or lead and be an upset chance.

4.Steven James sweated up and got an easy time near the pace fresh up and just held on. $3.80 FF is too short.

The speed map shows four runners going forward to lead with many looking to get just in behind, so a good tempo early and at least even after that suiting runners with good runs and maybe off the pace. 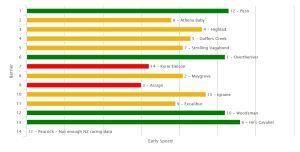 Confidence: 2/5 where Maygrove and Excalibur look well placed to win. With Igraine having a few negatives it makes them value.

9.Excalibur good run last start when running home in the fastest last 600m of the race in the best Speed rating all day. Third up over 1950m is ideal and he can run fast times over middle distances, so if they go along at a solid clip, he can swoop and be right in this.

12.Peso rated a career best run last start and drawn to get every chance.

6.He’s Cavalier dropped back 1600m last start and ran a solid third. Two strong winds over ground before then. Will go forward and with a good run, is right in this. All 7 wins have been right handed though.

13.Igraine has the hoof pads on and has had a 35 day break since her last win, plus it is her first crack at Open company – No $4 shot.

The speed map shows plenty of early speed and a fast tempo is very likely suiting off pace runners.

4.Star Treasure showed he has the ability to win a few races when finishing a strong second to Summer Passage at Ellerslie in the Sistema Stakes.  He didn’t go on with it after that. He’s since transferred to the O’Sullivan/Scott stable and been gelded. He looked ready to fire fresh up in his trial when in behind to the turn and never got clear and was full of running. Drawn to settle midfield or behind it on the fence and with the fast pace very likely, he looks set to pick a path and get over these. RP $4, Opened at $15 FF and into $6.50 FF

14.Power Dream ran on late fresh up and drawn to get a cosy trip.

1.Born Again  won well fresh up and with a good run, should be in this.

3.Ottavio loves it here and won easily last start. If he can cross and lead without burning too much, could pinch it again.

The speed map shows 6 runners going forward with 4 of the outside draws being the bulk of them. So a fast tempo likely setting it up for a closer.

8.Love Affair looked in need of her fresh up run but still ran a strong second to the smart Te Akau Shark. back to 1200m where she is 3 from 3 suits better also. She will be fitter after that run and with the fast pace up front, she can settle behind midfield, and with her rare turn of foot, she can swamp these late. She easily beat Volpe Veloce in April over 1200m. RP $4.00, $5.50 FF

3.Julius freshened up after two strong runs. Will have to work early or get caught wide, so may be vulnerable late by a closer like Volpe Veloce or Love Affair. Update Saturday morning – with the two other  scratchings it does make his task easier to cross, but still needs a clean beginning.

7.Volpe Veloce won the Railway on an unsuitable slow track. Her trial said she was ready to fire fresh up. Drawn to get a winning run about 6th or 7th and WFA suits.

1.Packing Eagle  won this last year and drawn to do nothing behind a good tempo.

5.My Dakota has the best Formpro rating on a Dead or better track and drawn to get all favours. Beat Felaar over 1600m at Ellerslie in a good speed rating. RP $3.60, $3.60Ff

9.Paint The Town  if they go hard, can swamp them fresh up.

8.La Mia Stella won impressively second up last campaign. Definite improver from fresh up run when working early. Needs luck but if gets it, can win.

12.Scarfi  did win well fresh up and drawn to get a good run. Looks stronger as well.