At the last meeting here at Waipukurau they had 7 races and 7 of the winners came from 6th in the running or better on the Slow( 1.15 for 1200) track. This time we have a Dead 4 with fine weather so they should be running around 1.12 on this track for the 1200m where the times are generally slower than standard. The full preview is here.

I need to up my game this week. Monday was frustating for many punters as well. Madison County was simply beaten by the tempo. He won at Hastings because of the faster tempo. The full 200m sectional breakdown can be seen here of that meeting and for those that follow the trots, the Flying Stakes closing sectionals show that Ultimate Macehete is right on track to take the Cup out.

The speed maps worked out to be a very useful tool with Tattybogler, Comeback, Single Moment, Sword Of Osman and the The Mitigator all winners and mapping to get the runs they got. At Ellerslie on Saturday, those speed maps will also reveal which runners should get winning runs. As we know, they often back off midrace giving on pace runners the advantage there. So I’ll be doing my best to find those runners that should get those winning runs and are good enough to win. Either way, it is going to be great to have racing back there on a decent surface with only a few showers forecast on the day, which may not eventuate. Hopefully the track really produces the goods and we eventually get racing there much more.

I’ll post an early preview of Saturday by 6 p.m. tonight. Counties has a glorified trials meeting on tomorrow, so I won’t be wasting my time working out winners there. My time will be much better spent on Saturday’s fields.

The bookies have Fearless as a $2 favourite in the first race but he may find one better again in Italian Lover. When Fraser Auret and Lisa Allpress combine on decent horses, they are always a force to be reckoned with. They map to get the drop on him as well.

The speed map shows Fearless likely to lead with Italian Lover, Stevies Surprise and Christiano out wide going forward also. A moderate tempo is likely suiting runners in the first half. 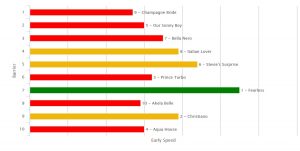 8.Italian Lover almost won on debut after covering extra ground out wider in the better ground. The winner has gone on with it. She has had a break but will no doubt have had jumpouts to be ready for 1600m fresh up again. Maps to get out and be on the pace and Lisa Allpress knows what she is capable of now, so looks the one to beat. RP $3.40, $3.50 FF

1.Fearless  has cost punters a bit in his six starts. He ran a good fourth last start in a harder field at Hastings. Up to 1600m for the first time which is a query especially at $2.00 FF

6.Stevie’s Surprise has had a few goes, but with a good run likely, can place at nice odds.