Posted by: Neil Davis in Results, Selections November 8, 2018 Comments Off on Saturday 10 November preview below 1,139 Views

Update; 2.42 Danon Roman looks very well and according to Jayne Ivil has come on since his last run. The money has come for him and all we need is one of James McDonald’s best rides and we are in. He needs to be in front of him 400m out. $50 win FF at $3 and $50 win tote. 7th after getting all favours and raced too keenly according to James McDonald and did nothing when challenged. Back for Sky Boy at 5.08 p.m.

There are two well placed quality bets in Australia which I will update 2 minutes before the race.

With the heavy track at Riccarton now, there may be some value there, especially in the Head to heads. For some reason they don’t post those until 11 a.m., so I’ll post the update by 1 p.m. so I can see how the track actually is.

There are some even fields at Te Rapa and the ones on my short list aren’t placed in the right races to confidently back.

But I’ve given my thoughts on some of the races in New Zealand and you can use them in your action bets if you want.

The Money Shot’s best sports bet is below:

After you’ve watch the Poms get beaten by the All Blacks and have tucked into some bacon and eggs you can enjoy the France v South Africa test match at 8.45am on Sunday.

South Africa lost narrowly to England last week but welcome back a stack of key players who were unavailable last week.  France haven’t played since the mid year tests in NZ.  With a game under their belts and the key personnel returning expect the Boks to run out comfortable winners.

The speed map shows Red Knot from the inside draw leading with Sky Boy with his early speed looking to get 2nd outer or may even lead if Red Knot lets him go. Nothing else has led in recent starts so it should favour on pace runners.

1.Sky Boy has won four from nine starts. Two starts back won in the best Speed rating all day over 1550m on the pace. He’s a big strong fella and last start stepped to 2000m and settled easily 2nd outer, led on the turn and kept up a powerful gallop tin strongly beating home Savacool who won well at Flemington on Thursday. He stays in the same grade and goes up in weight. But he is built to cope comfortably with it. His races have been well spaced and he maps to get every chance on the pace and be too good. RP $1.50, $2.05 FF

10.Red Knot will look to lead. Won well last start and a country meeting over 1600m in fast time. Had 30 starts and this is his first go at a middle distance. Should give Sky Boy a nice drag into the straight and could hold on for a place. RP $11, Currently $17 and $4.40 Ff

13.Highway ran a strong close second two starts back on a dry track in good time and battled on a wet track last start. Ran third to Youngstar in the Gr2 Roses last campaign. Likely to get a good run about fourth or fifth and is a good place chance at nice odds. RP $12 Currently $18 and $4.50

12.Nicochet  found the line hard over 1500m last start after getting a good run from the back. First time over a middle distance and likely to settle back. Could place with a clear run.

6.Mazaz good second fresh up and was fifth behind Miss Shanti but was found lame after the race. Likelyb to land about 6th or 7th and be close enough to place.

5.Mark Two had excuses behind Sky Boy last start when slightly lame. Better than that and maps to get a good run behind the leaders.

2.Solo Mission a battling 6th behind Sky Boy last start and will get back midfield or worse so hard to see him beating Sky Boy.

4.Merovee only placing over a middle distance was 3rd at Randwick in a below average speed rating. Battled on ok last start over 1500m a bit one paced, so 2000m may suit now. Drawn wide and only won 2 from 13. Hard to see troubling Sky Boy coming off a moderate tempo.

11.Miss Shanti won last start off a strong tempo when the rider up front went hard well before the turn after working early. So it was set up nicely for her. She has only won 2 from 12 and maps to get back off the moderate tempo this time. Up in class as well.

The speed map shows Danon Ronan, Boxachocolates and The Pinnacle out wide going forward and a slow tempo likely suiting on pace runners.

7.Danon Roman fresh up ran a  strong third to Furion over 1700m. Second up ran 5th behind Furion and Best of Days in the same closing 400 and 200m as Furion and he was late getting clear and hit the line the best of anything. Third up last start ran a 0.3L second to the favourite in this, Lucky For All. He was just held up a little from the trail in that too and was behing Lucky For All on the turn, but he kept fighting very hard to push him close. This time, there is a 2.5kgs swing in his favour which is more than enough to swing it his way over Lucky For All, plus he should get the ideal run in the first four and is peaking. James McDonald will be keen to win this time. RP $2.40, Opened $4.20 and is now into $3.80 FF

5.Lucky For All is favourite but got the perfect run last start and meets Danon Ronan 2.5kgs worse off. He tends to run around in the straight too, so is definitely beatable. RP $4, $2.70 FF

11.Top Prospect 1st $11 game second last start and drawn to get a good run. Tends to find one better a lot though.

8.Pleasuring battled on ok for third last start. Should get a good run but hard to see beating Danon Ronan

The speed map shows good early speed from 6 runners ensuring a good early tempo and an even tempo suiting all runners.

3.Sir Nate is following the same path as Embellish and Xtravagant did to win this race last year and in 2015. He won at Trentham against the older horses at his last start and won strongly. The Blinkers go on at the right time. He’s drawn the inside and won’t mind any rain. He should do nothing in the run and from 3 back on the inner, where he maps to land, he can upset them. RP $6, $13 FF

9.Dawn Patrol two strong wins and although this is harder, he looks to have plenty of upside. He really comes into it on a slow or worse track. Drawn to be 3 wide with cover and that could be the right place to be. Trialed very well recently and has been working like a winner.

4.The Chosen One was a strong winner here second up over 1600m after getting a softish lead. His dam The Glitzy One, won on a heavy track her. Maps to get a good trail behind Sword Of Osman and if the inside is ok, is right in this.

2.Madison County  won the Hawkes Bay Guineas off a solid tempo and should get a similar tempo again. His last 200m at Te Rapa of 11.03 was the fastest all day off the slow tempo. He may end up in an awkward spot back on the fence though which makes the $2.80 hard to take.

The speed map shows not a lot of early speed and a moderate tempo likely suiting runners in the first half of the field. 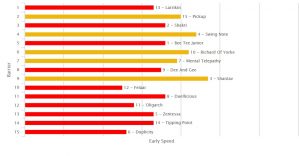 1.Bee Tee Junior  has been building up nicely for the Cup and from the good draw, will be a a good spot and be fighting right to the line. 60kgs makes it tough though but the heavy track brings him right into this. he won a reaol slog on a heavy 11 track at Ellerslie in an R75 race over 2200m. RP $5.00

4.Swing Note won strongly here last start and has that will to win. And has won on a heavy track.

2.Shakti has won 9 races with 6 of those on slow to heavy tracks. He may be nine but he’s a tough so and so.

In race 1 5.Probabeel looked very good in her trial win but $1.65 against four other first starters makes it no value. 7.Tennesse Rock  looked ready to fire after a good second in her trial but drawn wide.

4.Steven James looked impressive last start and is a natural improver. 7.Joe’s Legacy ran on late in the best sectionals last start. If he can land closer will be harder to beat.

Race 3 2.Fabulous Flight drawn to get a good run but can be a bit slow away and 1600m may be better for him.  6.Sagunto disappointed last start after strong form. Could easily bounce back.

2.Sahar was in the slower ground last start and ran a strong second. If inside is ok here, ready to win. 3.Heavenly Emperor comes out of a strong form race.

I really liked the winner of 3.Yearn at Ellerslie last over 1400m. he’s drawn the inside here and should trail Indecision on a moderate tempo which may not suit her, as she is best suited to a decent tempo and maybe 1400m or more now. So with Indecision getting a soft lead with Untamed Diamond a big improver and Santa Monica charging late, it does make it a small but tricky race.

2.Mars Bars looks well placed at the weights but may settle behind midfield on the rail and with the big field, may get out too late. 13.Ritani won very well fresh up and should settle handy. 1.Keely Bee  on her home track could upset.