Posted by: Neil Davis in Results, Selections February 21, 2019 Comments Off on Saturday 23 February preview below 963 Views

Update: Apologies for no update on Hanger. He ran a fair third.

Matamata late quaddie, $31.50 for 10% Missed- apologies for not putting in 2nd selection Aretha!

Heads Up is here with a preview of the main race at Otaki and the Money Shot’s best sports selection ( playing Friday night) Highlanders to lead by 9.5 at half time at $1.92, plus the winner of the $5,000 multi bet and next week’s lucky winner. Knocked out after

3.Effervescent 2nd $2.20 won well here on a slow track fresh up. Good run two back from the back at Trentham in an on pace race. Battling 4th last start on a Good track. Drawn to get all favours. RP $5, $7.50 FF

1.Tolemac was close up in a stronger 3yo race two back. Too far last week.

6.Philosophical  drawn to get every chance and is a nice horse.

2.The Helix won well fresh up and with a good run, can be in it.

The speed map shows good early speed and an even tempo likely.

9.Concert Hall 1st $3 is a very good mare who had to be good to win last start when missing the start, getting back off a slow pace , but still blew them away running her last 200m in very good 11.54 . She has won twice on Dead 6 tracks and with a clean jump can settle midfield which should be ideal and get over these with 54kgs. She also looks better left handed. RP $2.70, $3.70 FF

6.Rhinestone Cowboy 2nd qu $5.80   is obviously a good horse. Fresh up over 1600m against a good field is a big ask though. Trialed nicely when held up late on the fence going well.

8.Neeson should get a good run on the pace and if the track is no worse than a Dead 5 should be in it.

14.Za Za Gabor has been a decisive winner in both her wins. Light weight and a good run on the pace means she is the one to run down.

1.Monaco has won his last two very well. Drawn wide but looks to be good speed up front, so Trudy can snag back and and with a good track into it, be hard to keep out again. RP $4, $4.80 FF

2.Mr Universe bolted in last start in an easier maiden. Should be right in this.

1.Aotea Lad tried very hard in the KM for second. Strong 2yo and action says a Dead to slow track is ok. Won a slow track at Trentham. negative is he has had three hard runs so may be in need of a rest?

3.Equinox was an impressive winner on debut with a powerful action best suited to a Dead 4 or better so dependent on what track does. Rider said he didn’t handle it.

8.La Mia Stella 1st $5.60 was a decisive winner here last start off a perfect run. Tougher from a wider draw and up 2kgs. RP $4

3.Danger Dee ran home hard last start in a very good last 600m and with a good run behind the pace, could do it.

2.Owen Patrick with a soft time up front can bounce back.

6.Giant Gem has the blinkers going on which will help. has won on a slow track.

2.Bavella was caught 3w open last start on a slow 7 track and was still too good when she drew clear 200m out. Hasn’t trialed since but will be ready to go. has enough early tactical speed to get into a winning spot. RP $2.70, $1.90 FF is too short.

5.Aretha 1st $15  ran a good third on debut and the way she went to the line full of running in her recent trial, shows she could upset these from the ace draw with a good run likely.

1.Appelant ran a very good 3rd in the KM and and a wet track will be ok. Wide draw no help though.

8.Harlow was impressive coming from last to win at Te Rapa. Likely to get back, but if they go hard, she can swamp them.

The speed map shows early speed from wide out and an even tempo likely. 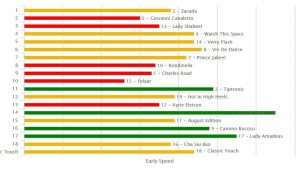 3.Tiptronic ran a career best run last start at WFA rating 114. He drops to 56.5 kgs and just needs to rate 113 to win this. Drawn out but Jason Waddell should have little trouble crossing with the early speed outside him then can take a sit. he ran second here on a dead 6 track in a big mile race to Ocean Emperor. Very fit and on his home track looks hard to beat.

10.Rondinella 2nd $1.60 has always promised to do what she has done recently with two dominant wins. This is by far her biggest test to date. If the track gets to a Dead 5 or worse, the $2.90 Ff becomes hard to take as she needs a decent footing against this stronger field.

1.Charles Road, despite the 60.5 kgs, won’t mind a dead 6 or worse track as he has won on slow tracks, and is third up and fitter.

The speed map shows good early speed and at least an even tempo likely.

15.Poppy Star had her first crack at 2000m last vstart and did very well for a close second after working more than Konstantina, the winner and race rival. Drawn to get a good run and a Dead to slow should be ok.  RP $5.50, $9 FF

10.Princess El Jay  is a tough middle distance mare and could upset with a good run.

5.Our Hail Mary  1st $4.60 looked good winning on debut with a good stretch late. Can come with the last run again. RP $4

3.Maria Dior is always a chance in a race like this. Plenty of money has come for her since opening.

The speed map shows plenty of early speed and at least an even tempo.

2.Hanger 3rd won in good time at Awapuni fresh up then was outclassed in the Telegraph. Freshened up again and has won on a heavy track. The decent tempo in this suits him ideally as he will likely snag here and with Troy Harris looking to get a track into at the right time, he will be very hard to beat. RP $2.20, $3.40 FF

1.Sweepstake will likely be back with Hanger and her best form is on dry tracks so can’t see her beating hanger home with Troy Harris v the apprentice either.

8.Vinnie’s Volley has won on slow tracks and will be improved by that last run.

8.Castani is close to a win and Opie could make all the difference.

3.Malo Bik drops back in class with 4kgs off. Dead to slow ok.

3.Blue On Black won fresh up last campaign and ready to repeat after a good trial win.

1.Thutmosis two solid seconds and 4kgs off always helps when you are trying lead all the way.

2.Harlem ‘N’ Co late scratched really hit the line hard last week at Wanganui after being held up. Fitter now and 1600m will suit. Has won on a heavy track here over 1400m. RP $4

1.Platinum Wild Card  had his chance last start and fought well for second.

5.Gerda  looked good winning here last start and drawn to get all favours.

1.Sampson looks an uncontested leader here and despite the weight, he won’t mind what the track is like, he could prove hard to peg back. RP $7, $14 Ff

4.All In Vogue had a tough run over 1600m last start. Fitter and h=gets in on a light weight. Slow track will be against though.

5.Felaar 1st $1.70  ran on well late fresh up and will get back, so the slow tempo will be against. If swoopers are winning, he is the one to beat.

The speed map shows just a couple of runners looking to be leaders with a few looking to tuck in behind so a moderate tempo likely.

8.Melody Belle 1st $2.50  showed her toughness when coming off a poor run at Trentham to drive through late and win at Te Rapa. She won the WFA 1600m Windsor Plate at Hastings on a Dead 4 track after winning on Slow tracks at Hastings and Te Rapa. She maps to sldie over and get 2nd outer on a moderate tempo and it is going to take a good effort to best her. RP $2.60, $2.80 FF

9.Volpe Veloce was beaten by a wide draw when she had to snag and a slow tempo at Te Rapa. Drawn to land closer and won the Railway on a slow track.

2.Shadows Cast is in the best form of his life and and drawn to land on the pace, which will be the place to be.

7.Platinum Invador 1st $1.60 qu $6.70  is a good horse who would have been right in the Avondale Guineas with a clear run. He went to the line full of running. He still ran the fastest closing sectionals rating an FR of 103 which still puts him clearly on top here with just 54kgs. He has to win this to get in the Derby field so at least you know they will be all out to win this. he has won here over 1600m on a slow track so any rain is ok. Smaller field helps as he will get back but he has a fast last 200 metres so as long as Johnson doesn’t get held up in the straight, he will be very hard to beat. Slow track ok as he has won here on it.RP $1.80, $2.20

9.Schist  2nd $2.40  may well have won or gone very close last start with a clear run she was going so well when held up. 2100m should suit as she is on her way to the Oaks. Looks the obvious danger.

Highlanders @ 1.93 just missed in last minute of first half.