9.Santa Catarina looks very fit and ready to fire fresh. Money has come for her too. $100 win $4.20 FF 2nd after getting every chance

Bruce R won the $5,000 multi this week and his 9 leg multi is at the bottom of this page. Knocked out at the first hurdle!

Some big open fields with the big money up. Santa Catarina and Firefly are two Quality bets which i’ll update 2 minutes out. Plus I’ll post an update by noon with quaddies and any other bets in Australia etc.

The speed map shows plenty of early speed from the inside 6 runners and an even tempo likely suiting all runners.

9.Santa Catarina 2nd $1.70  is a very good mare who raced well last campaign with above average closing sectionals. But she always looked like she would be much better next campaign. She trialed recently and missed the jump after jumping and got back but ran home very nicely under her own steam. Drawn 1 here and she usually begins well and can be trailing or three back inner off the even tempo, and Jason Waddell will find the gaps in time to allow her to get over these. RP $4, Opened $6FF and into $5 FF early which is a good sign from this Marsh stable.

6.One Bakerstreet is a good horse and if left alone mid-race in front, is the one Catarina has to run down.

4.Short Fuse was ridden upside down last start when leading and got a bit keen, but fought well for third. If she can get nice cover and come at them, she should be in it.

1.Born Dragon just beaten here over 1200m fresh and ok second up. Drawn well and gets 2kgs off again.

2.Maktoum 1st $6.80  has run the closing sectionals of a top horse, but he maps to settle 11th outer and I can’t see them going hard enough for him to get over them over the 1200m.

The speed map shows good early speed from wide out and inside runners should kick up as well, all ensuring at least an even tempo suiting all runners.

1.The Fame Game is looking for 1400m and gets it. Right tempo too should see him charging late.

4.Sahar is a nice galloper and from the inside draw should get all favours. Rated a career best FR of 101 last start and nice trial recently.

11.Spindle maps to get a good run and she ran a strong second last start over 1400m.

The speed map shows Othoserussians, Nordic  and Noble Star going forward with a few looking to tuck in behind. A moderate to even tempo likely suiting runners in the first half of the field.

5.Nordic has improved nicely at each of his runs. He’s better away from other horses so the wide draw should allow him to slide over 2nd outer and with a moderate tempo likely, be the one to kick and run down. RP $3.80 $5.50 Ff

9.Incantesimo didn’t see out the 2100m last start after going well to the turn. Back to 1600m and in grade, from a good draw, means she can upset at $9 FF

1.Lucky Sweep 1st $11 drops back in grade and with a good run, can win. Very good third two starts back in R72 company.

2.Appelido  maps to get back which will not suit with the moderate tempo predicted.

The speed map shows The Mitigator and Swisswatch sharing the pace and they may just sit there and get away with a moderate tempo, or something like Gino Severini may press on and get 2nd outer and set an even tempo.

11.Paisley Park has looked good all the way through his career and although the trainer had a concern about him right handed last start, he was still too good beating the unlucky Concert Hall who has bolted in twice since. Weighted well and Samantha Collett will give him every chance. RP $3.50, $4 FF

1.The Mitigator if left alone by Swisswatch, could prove hard to run down – just keeps on trying his best.

8.Podravina 1st $6.80 did it tough last start and ran a game third. Darwn to get a winning run this time.

13.Gino Severini drops in weight but up in class. Early money came for him from $14 into $9 but I’d like to see blinkers go on him to help him focus on the job better.

The speed map shows Lady Amadeus and Lady Shabeel likely to get a soft time up front.

1.Zacada definitely looked in need of the run at Matamata and ran on well for 6th. Drawn to land about 3 back inner and from there, could upset the favourites. Rates on top in the Formpro Ratings after weight adjustments. RP $5, $7.50 FF

9.Sacred Day  is best suited ridden quieter. Will get back and have the tempo against, but on 53kgs, can work a bit more earlier and get close enough to strike.

6.Artiste just keeps on racing well. Tempo likely to be against but with a good track into it, has to be a chance.

The speed map shows Misha’s Star leading with a few looking to be in behind- a moderate tempo likely.

7.Rubira raced well enough in Group 1 and 2 races in Melbourne. After coming back, she has raced as though she needs more ground. Drawn to get a good trip on rails and this big striding filly can get home from there. RP $5, $8 FF

4.Sunny Rose ran a game 4th at Te Rapa in the slower part of the straight. Drawn to get every chance.

12.Spring Delight  relished the middle distance last and won easily. Drawn out which makes it harder.

1.The Real Beel  from the good draw can settle closer and is a chance from there after her big run for 2nd here on KM night.

The speed map shows Queen Of The Air and Wekaforce ( Blinkers on which could fire her up)  likely to share the tempo which looks even.  Princess Amelie looks set to get a good trail or 3 back inner. 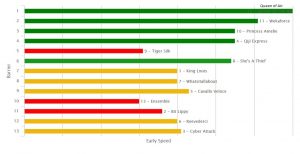 8.She’s A Thief looked  good winning here last start and she should be in the right spot, 4th outer, to pounce 150m out and lead and hold the rest out. She is an improving mare nicely weighted here. RP $4, $5 FF

12.Queen Of The Air was a dominant winner in fast time fresh up. She should be able to hold the lead here and her chances just depend on what happens midrace. If she gets taken on by Wekaforce, she will be vulnerable late over the 1300m. If not and she gets her own way, she can win. My gut feeling is she will get run down late over the 1300m so is no value at $3.20 FF now.

10.Princess Amelie is certainly capable of upsetting here. She finally gets a good draw and maps to trail a good speed and has the ability to be right in it at big odds, $35 FF

The speed map shows Ferrando and Rocanto leading out with a few looking to get in behind. A moderate to even tempo likely.

2.Ferrando may get a softish lead here and after his close second in the Telegraph where he sweated up badly, in this weaker field, has to be hard to run down.

5.Rocanto maps to get a good trail and and from there, is a a realistic chance.

9.Spring Heat closed fast in top sectionals last start here. The tempo may not be fast enough again for her though- depends on how fast Ferrando runs them along.

The speed map shows The Chosen One, In A Twinkling and Arrogant likely to lead with many looking to be in behind them, so an even tempo likely with the big field, suiting all runners. 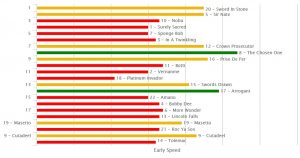 18.Platinum Invador 3rd $3.80 would have been right in the finish if he not been held up in the Avondale Guineas. In fact I feel he would have comfortably run third with the gaps opening in time. He ran the fastest closing last 200m of the race of 11.92 and would have run around 34.1 for the last 600m with those gaps opening in time. It wasn’t by any means a hard run either, so Lisa Latta backed him up at Otaki and he won strongly on a wet track. So in effect, he is coming into this rock hard fit off a seven day back up, so I’m not concerned about the 3 runs in two weeks. The speed looks good enough to allow Chris Johnson to just drop him out and get a track into it when they start to move and as long as he stays clear of tiring runners, I’m sure he will be charging home late and be very hard to beat. RP $6, $10 FF

3.In A Twinkling 2nd $2.40 put in a huge run in the Avondale Guineas doing the most work and only just went down. Drawn to get a good run this time and drops his head nicely for a tough staying event like this.

1.Surely Sacred won the Avondale Guineas but was flat out holding out In A twinkling who had a much tougher run. Will be even fitter after that and drawn to land closer and do nothing. No value at $3.50.

2.Vernanme lovely galloper who ran on strongly for third in the Avondale Guineas and is peaking nicely for this fourth. Has the breeding to see a strongly run race out.

The speed map shows Special Light from the inside going forward with not many looking to take her on. A moderate tempo likely. 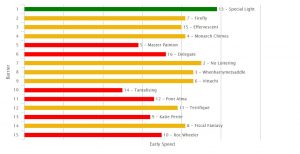 7.Firefly has been racing and rating strongly. She has needed time to strengthen and she hit the line hard last week. Drawn to get every chance behind a moderate tempo and with the 3kgs off, will take a bit of beating with the tempo right in her favour. RP $3.80, $6 FF

14.Tantalising 3rd $3.10  is a nice mare. Steps up in distance and likely to get back off the moderate tempo and rely on luck to get a track into it.

8.Fiscal Fantasy 2nd $2.30  was a bit stiff last start. Drawn wide and will get back off the moderate tempo, so $4 is too short.

Below is Bruce R’s $5281 multi return for $12 tonight and tomorrow. Good luck