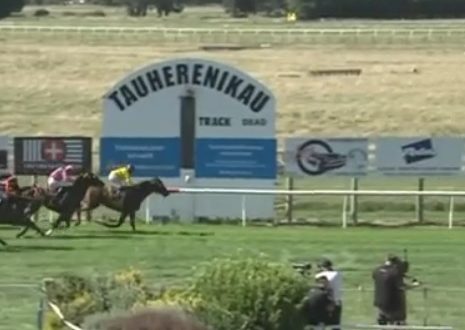 Posted by: Neil Davis in Results, Selections April 17, 2019 Comments Off on Thursday preview below 591 Views

Update: 2.Wicklow looks nice and relaxed and looks ready to win. 3rd- and just no luck in the running.

1.Opawa Hop  looks very well placed to lead all the way here. He jumps quickly and loves to hug that rail. He has the two best times after adjustments for beaten margins and the two best closing sectionals of 12.13 and 12.15 in the last 90 days. The dogs drawn in 2,3 and 4 all like to stay away from the rail early, so he just needs to jump like he has been doing to lead and he should win from there. RP $1.50, opened $2.30 and into $2.10 FF

Main rival Von Strass is fresh up and the inside four runners are likely to hold him out wide into the first bend with Hoppy holding the inside and the lead.

Wicklow ran home in 34.81 at Wanganui and Rock On Choux 35.76, nearly 6 lengths slower and Wicklow did it wider. The tempo was slower in ROC’s race but even taking that into account, Wicklow’s was definitely the superior run and ROC is second up over more ground and drawn to do extra work.

Another tricky meeting with those Levin invisible jumpouts making it no easier. Just the one Quality bet today in race 7, Wicklow. I don’t like being on back runners, but the tempo looks good enough for him and with the 2kgs off and with only 9 horses in the field now,  he should get his chance to unleash. using the value staking plan the bet would be 4.5/2.7= 1.67, 1.67 x 2 = 3.3 so using $30 units it would be $99 win at $4.50FF

There may be some value head to heads ( H2H) posted in the update as well, along with a suggested quaddie.

An open race to start with – the bookies have six runners at $8 or less.  Will wait till the Head to Head comes out. Or watch out for closers in the market. The best value is 8.Sanchez as on debut he relaxed well at the rear and reeled off the fastest last 200m of the race. More ground looks ideal.

An open race and market movers will be the ones to look for in this field. Zartan has moved in from $7.50 to $5 but all of his wins have come on slow or heavy tracks.

A race lacking solid form, but the head to head may be throw up something.

5.Scottish Star  showed a good turn of foot to win on debut in the best speed rating all day. Drawn to get all favours behind an even tempo and hot jock J parkes snaps the ride up.

8.Rhiza  was run down late and looked very well before the start – ready third up now and drawn to get every chance.

11.Colorado Miss  had a couple of gears to go through after she was held up last start.

The first leg of the quaddie and the bookies have six runners clearly on top here. I’ll post a suggested quaddie in the update by 11.30 a.m.

2.Proletariat opened at the very good odds of $13 and has been backed into $8FF. On debut he was well backed into $3 and relaxed well on an even tempo and was just beaten by Whatsup, a nice horse, who had the advantage of the better ground by the outside fence at Wanganui. The race time was almost identical to the R65 race the same day as well. Second up was a bit flat and caught in a slow lane.Drawn to get all favours here and the early money says he is ready to win. RP $5, $8FF

1.Fearless has had many chances but has drawn well. I don’t know why they don’t put the blinkers on him. He is beatable.

12.Qiji Crystal  has drawn wide but if the pace is on, can do it.

9.Sweet Alvira  has been racing in stronger fields in her last two starts and was a nice 4th last start. Beat Home Lady Verawood three starts at Otaki and she is the $3 favourite and Sweet Alvira is paying $8.50 and $2.50, so that has to be value. Only query is if it gets back to a Good 3 as she has an action best suited to a slow or worse track.

The speed map shows McHale and Sweet Alibhai looking to share the pace with a few in behind keeping them honest, so an even tempo likely.

2.Wicklow last start over 1350m  got back from a wide draw and unleashed very strongly wide out. he ran home in 34.81, the 4th fastest all day and the third fastest last 200m of the day of 11.44. The faster ones were over 1200m. So third up over 1600m suits this nice looking galloper. He maps to get back but there looks to be at least an even tempo and in the 9 horse field, Zinjete Moki, with her 2kgs off as well, should be able to plot a path either through or around them, preferably around them as he seemed comfortable there last start down the straight, and power over these in the last 100 metres. RP $2.70, $4.50 FF

7.Shez Ekstra had her chance last start, despite being a bit tight over the latter stages. That was off a slow tempo as well and the winner came from behind her. She has been backed in from $3.50 to $2.80 ( including scratching) and I just feel Wicklow will be too strong for her over the last 100 metres.

3.Tiro may have needed the last run where she ran on well from last. Before that she had a respiratory problem.

4.Lady Zeraph gets 4kgs off and was scratched from an earlier race. 1600m suits after a nice fresh up run in a stronger R72 field.

5.Lodi  once again goes out favourite but as she has proven, she is beatable.

10.In Segreto  had no room in a stronger field last start. Lisa Allpress jumps on.