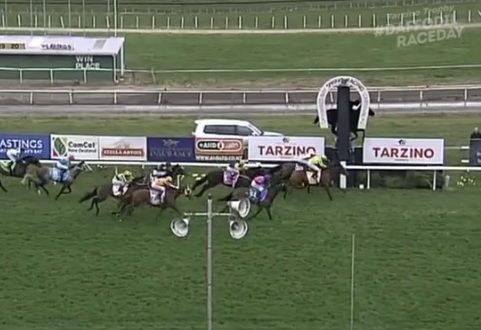 Posted by: Neil Davis in Results, Selections May 21, 2019 Comments Off on Wednesday preview below 572 Views

Update 5.43 Sonaree the money has come for him and the track is playing evenly. Should settle on a moderate tempo and  be very, very hard to beat. Bugger me- I was resigned to finishing out of a placing then the rider almost fell off- we’ll take it though!

Head to Head and recommended multi on both for a $49.30 for $10 bet return. Yes Remember to split the bet in case you want to cash out on one of them. See today’s post  about multi betting here

See the reasons below plus the fact the track is a Dead 4 track which really favours Wicklow as he has run some very good closing sectionals on better tracks whereas Rely On me has an action more suited to a Slow or worse track and his race fitness is less than Wicklow’s. RP $1.50

6.Sonaree 1st $2.60 after being 3 wide in the open all the way! won easily three starts back in a good speed rating when leading and kicking hard to run the fastest last 600m off the front all day. Then he ran two very good seconds on the pace in solidly run races rating strongly. Didn’t seem happy left handed so going this way round where he maps to lead or sit outside it on a moderate tempo, and with the 2kgs off, looks ideally placed to kick on these and be very hard to run down as he is very fit and the trainers are very good. RP $2.20, $2.90 FF

Nothing that I can select with Good confidence ( 3/5 or better) at Hastings but there are one or maybe two in Australia which I will post after scratchings come through by noon. The last quaddie seems the best value bet here today.

I was going to write my thoughts about Dutching, which is backing two or more horses in a race, but I’ll postpone that, as I have had some good questions about multis this week. So I’ll post that along with today’s update by noon.

1.Wicklow 2nd  can certainly win this after getting too far back last start and ran on well. His closing sectionals Drawn to land closer but you just never know with these races. He has had that run over ground which Rely On Me hasn’t which could tell if they run it truly, which they more than often do in these Amateur races. RP $2.60, $3.20 FF

5.Rely On Me raced well in stronger fields last campaign looking every bit like he would excel over middle distances. Trainer was confident he would go well fresh up but needed more ground. He ran a strong race off a tough run wide in the open for fourth. This looks ideal but in Amateur riders races you can never be sure how they are going to be run. he could beat Wicklow but he is very likely to improve again with this run and be a good bet next up.

6.Loire 1st $3.60 is a nice looking 2yo filly who did well on debut when she drew wide, bounced first, got into the 1×1, but was held when going well on the turn. She had to angle out when the race was over and found the line with something in hand. Drawn out again and needs a good ride but from the Pike stable who don’t waste their time with horses that aren’t going to earn their keep. RP $3.50, $4.60 FF

11.Amal Rose looked good hitting the line for third in her last trial coming from off the pace. Drawn well and the 1300m will suit ideally on debut. She is likely to have the last go at Loire and  can win if Loire has had a tougher run

4.Cinzento drawn to get a good run and be fighting it out but the above two look better.

4.King Farouk looked good running second on debut. He is likely to be back though and we don’t know how much that run took out of him and he will need luck coming from off the pace again. The speed does look good though so he should get the race run to suit. RP $3.40, $2.60 Ff

Confidence:1/5 One of the four should take this out.

4.Honfleur has had a few goes but drawn to get a nice run and needs a well timed finish so she doesn’t get left in front too far out. RP $3.50, $3

3.Defibrillate in his last trial settled fifth and finished full of running when in traffic. Set to go on debut.

9.Glorious Missile in her last trial began fast, led and was run down late. Good trial.

6.Le Grazie 1st $4.60  is a big fella and looked good striding away for an easy win in his last trial. Ready to go.

8.Swagger ran on well late on debut and drawn to land closer. 1400m will suit better too.

12.So Sue Me  looked a definite improver out of her good debut fourth and drawn well.

9.Tuscan Whistler  1st $11 two starts back ran a very good 4th when 3 wide in the open and kept closing in a handy field. Then last start drew the inside, for some reason was allowed to drift back on the inner showing no interest in staying handy, then they slowed up front so he started pulling. Once out he ran on well and was held up late. He’s a nice horse and I’m sure from the inside draw this time he will be ridden more positively and the 1300m looks ideal. Ready to win now. RP $6, $10 FF

8.Triple Diamond won well on debut sitting 3 wide in the open. Then had a few tough runs. Looked a definite improver out of her recent trial after sweating up  when 3 wide in the open and was swamped late without being pushed. Ready to win from Baker/Forsman stable.

2.Willpower is best suited to truly run races and could get that here but drawn out and will need a good ride.

1.Cameahotfriday  drops back in class after an improver’s sixth and gets 3kgs off.

1.Sacred Judgement 1st $2.00 is ready to go after two trials and may try for an all the way win.

3.Tonadalis looked good winning his maiden then tied up at Tauranga. Trialed well and ready to go fresh up.

5.Yossarian has had two runs back now and with a good run should be right in this.