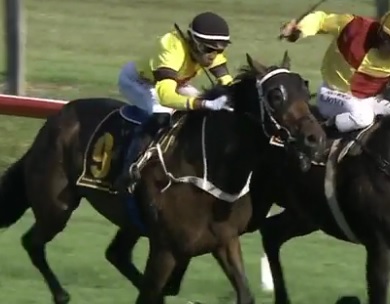 Posted by: Neil Davis in Results, Selections May 22, 2019 Comments Off on Thursday preview below 645 Views

Update 5.35 p.m. The inside few metres is well off here as nothing has won near the fence all day and the last race winner came from back and wide and the second horse 3 wide on the pace. It has drawn the inside, so no bet on Maid In Milan. There are two 4/5 confidence bets posted here for Saturday. Ran 4th after hanging a bit – not a bad considering the bias.

Update 12.03 Dangerman looks rock hard fit and just needs a clean jump to get on the pace and be very hard to beat. Missed after blowing a valve soon after turning in.

No recommended quaddie today as it is just too open and the  pool isn’t worth it.

It was a good day yesterday with an amazing run from Sonaree at Canterbury Park winning after being posted 3 wide in the open. The quaddie was ok but Aero De Paris would have been a very nice result for some. He’s ready to win now. Plus the recommended multi with the Head to head with Wicklow into Sonaree was a bonus. The last few Good Confidence bets have all just got up which is good, but as we all know in racing, they could just have easily got beaten. So make sure you get your betting right so when we all hit that losing run, we aren’t going to blow the bank. And having a bank is so important. If you haven’t got one, and you want to last in this tough game of punting, then you have to get one. Put aside an amount each week into a separate savings account and every time you have a win, add to it. Before you know it, you will have a decent sized amount and can bet a small percentage of that on each bet, so when that losing streak hits, you won’t stress as much about it.

I’ve been through the Pukekohe fields and apart from one race, just have no confidence in any of the races. They are big fields on a slow track with very few having strong lead in form. There are much better fields on Saturday to do the form on so I suggest waiting for them rather than frittering your hard earned away on wishful thinking bets. There are two runners detailed below that are very fit and well placed to win. Both map to get winning runs, and they are both Quality bets.

Both bets below are quality bets and will be updated 2 minutes from start time.

The speed map shows Dangerman likely to slide over and lead or get handy with a few looking to be in behind the pace. Dangerman set a good tempo last start so likely to be the same suiting all runners.

He ran a very good race last start after leading and setting a 12.56 per 200m sectional to the 600m mark which was the fifth fastest all day of the nine races off the front. So he had every right to fade away 200m out but instead he kept fighting for second with a gap to third. The time was the fastest speed rating ( race time compared to all others on the day over all distances)  all day which is rare. He also rated an FR of 96 which wins most Saturday maidens. The start before he ran a strong second to Red Red Robin who placed in a strong R65 field next up. So now he is right at his peak and his action tells us a slow track will be ideal for him. Drawn wide but maps to slide  over and get handy with a decent 300m run into the first bend. From there, Ryan Elliot knows what he is capable of now, he is very fit and should be a good chance to beat these home with just a little luck in the first 400 metres. RP $3.20, $5.50 FF

The two main dangers that are in the market are 3.Krakadeel that had every chance last start and was a bit one paced off a 28 day break and Vedo Rosso who is stepping up to a middle distance for the first time with Opie on, so will naturally take a lot of money with him on.

10.Maid In Milan last start at Nowra NSW, she bounced fast but was held out 3 wide on a fast early pace then had to work to get 2nd outer by the 700m mark, running the first 600m in 34.4, so she had every right to tire in the last 200m instead she challenged 200m out and was only outfinished in the last 50 metres for third, 0.4L from the winner who came from a cosy run 3 back inner and the second horse came from last and wide. The fourth horse ran a good 2nd next up. She treks down to Victoria third up on the left handed Wangaratta track where she has drawn the inside and maps to lead or trail with only two others ( One has drawn very wide ) that can match her for early speed. From there, on the Soft 5 to Good 4 surface, which tends to play fairly, she can kick on these and peaking third up, be very hard to run down. Trainers don’t travel unless they can find the right race with the right horse and she looks to fit that bill. RP $3.00, $5.50 FF