Update: Twilight Run looks very fit and the track is playing fairly. Just needs a good run one off around midfield or behind it,  and with a track into it, he looks very,very hard to beat. Seemed to have his chance.

Update: Aero De Paris should get an ideal run and looks ready. 2nd after not the best ride I’ve ever seen!

The Money Shot has recommended the following multi.

Apologies- no update at noon Saturday.

The Multi maker is Wanganui dogs race 5 at 6.19 p.m.  4.Sir Duggie $1.65 Ff. He won strongly last week and maps to get a clear run at the lead again with the dogs either side likely to give him a clear early passage which is all he needs.

Apologies, No Heads Up today

Confidence: 3/5 and a Quality bet

10.Twilight Run is a very good progressive horse in the right race third up. he ran a very good third in the Tasmanian Derby then after a break, closed hard over 1400m for second. Second up he got back and sustained a strong last 600m to win well in a good speed rating over 1600m. The step to 2040m is ideal third up and on 54kgs, where he maps to settle back outer off a good tempo, he just needs to get a track into it, and I can’t see any of these outfinishing him. RP $2.20, $3.20 FF ( Suggested bet based on the Value Staking Plan is 2.9 units)

4.Copper Mine rated a career best FR last start and should get an ideal run.

7.Roc Cha  ran a strong second to Sai Fah here last start and he won the Ryder last week. From the ace draw, has to be the one to beat with raceday experience under her belt now. RP $2.60

2.Curve ran a very good 2nd at Trentham and has been given time to strengthen up.

1.Comeback  wasn’t suited by the very heavy track and weights in  harder field last start. He gets 4kgs off this time, maps to get an ideal run and rates on top after weight adjustments. RP $4, $5 FF

3.Battle Time  won very well at Tauranga and forget his run at Taranaki over 1400m on a biased track. Back to 1200m suits and gets 3kgs off.

4.Malambo  is the $3.40 favourite but he just didn’t finish it off here two starts back and even with the light weight, he is too short.

2.Southern Icon   with a good sit outside Ottavio, could kick and be hard to run down.

1.Because  did well with a slipped saddle last start. Almost won the start before and with a good run, can get a well deserved win. RP $4

13.Valmur has been rating well and with three kgs off, can be in this.

12.Magdala won impressively by 4 lengths last start and her time was 4 lengths quicker than Helena Baby’s on the same day. 1600m looks ideal and she maps to settle midfield or worse, which could be the place to be with a decent tempo looking likely, and if the inside is off, she can get out to the better part ok. RP $3.70, $5.50 FF

1.No Loitering  won well here last start which is always an advantage. Gets 4kgs off again.

5.Divine Duke ran a strong third fresh up and can only improve off that second up run at New Plymouth. He just won by 15 lengths here last August and gets in on a good weight here. Third up and ready to strike again. RP $4

6.Charlie Horse is back to his best now and has always shown that he could reach open company. Drawn to get every chance.

3.Andoyas  is looking for more ground now gets 2kgs off.

1.Bee Tee Junior  gets in nicely here back in class with 4kgs off.

10.Just Treasure  won impressively here three starts back and will appreciate the middle distance and has won here and gets 3kgs off. RP $4.00, $5.50 FF

12.Century Miss  is a nice staying mare who has rated well in strong fields. Matt Cameron will give her every chance.

4.Rodmar  won very well on Wednesday and in the same class, has to be a chance.

1.Aero De Paris  looks well placed here. When he won at Rotorua he looked very fit and more settled before the race. Craig Grylls was able to settle him away from the fence and after looming up on the turn, was asked for the supreme effort and he powered away to win strongly. The second and fourth horses have since won and it was easily the fastest of the four 1200m races. He maps to land midfield off the fence, which could be vital, and from there, despite the 59.5kgs, Craig Grylls can get him home again. RP $2.60, $4.20 FF ( 3.2 units using the Value Staking Plan

5.Wisdom Patch ran third to his stablemate, Aero de Paris, two starts back and ran a game second last start. Meets him 3kgs better off, but hard to see him turning the tables.

12.Ritzy Sparkle  is ready to fire fresh up after two nice trials. The last just beating melody belle, but she was ridden out and melody was cruising.

8.Red Forest  brings good form from the North Island  and with Lisa Alpress up, she looks well placed to win again. RP $4, $4.80 FF

2.Our Teddy Boy rates 3 lengths clear here after weight adjustments. He gets 3kgs off and drops in class. The blinkers come off and he should be in this.

5.Lord Beaver  won well last start and the change in stable looks to have given him new life.

7.Exemplar  has been winning them in a row and steps up in class here. Lisa Allpress should be able to slot her into a winning position and be the one to beat. RP $4, $4.40

8.Tabard was caught late last start. Is very fit which will definitely help.

2.Middagurd has placed twice here and a heavy track will suit. Is ready to fire fresh up after a quiet trial. RP $5, $7.50FF

4.Humble Pie  is a nice horse and would not surprise to see him win fresh up.

8.Regent Street  is in peak form and gets 3kgs off.

12.Confessional won easily last start. If the inside is ok, can win. 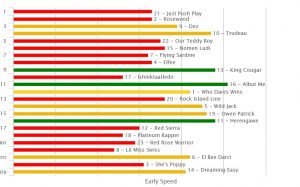 7.Flying Sardine won very well at Trentham after trailing and will relish a slog in the bog more than most and only has 53kgs. if she can settle closer, like she did last time, we know she can handle the ground, and has to be a good eachway chance. RP $6, $11 FF

13.King Cougar last start at Ashburton fought back gamely to look like he had  won but lost the bob. He should land in the lead or outside it and from there, on 53 kgs, with a moderate tempo, could just keep fighting to hold on. RP $8, $16 in from $23 FF

2.Rosewood put in a huge effort to run second last start after being last on an inside bias track at Taranaki. The 1600m is a query with 2 placings from 3 starts, but she looks stronger now and she has won over 1500m. Drawn near the inside though, and she maps to be near the back and the moderate tempo will be against her, plus she needs the inside to be ok which we don’t know about yet.

9.Dez  has found form at the right time. Ran an unlucky third in this last year and he is going to feel that relief of 7.5kgs from his last start.

3.She’s Poppy  ran a close second in this last year and with a freshener, can find that form again.

12.Red Sierra is racing well and drawn wide, which could be a plus or minus by this time of day.

10.Reliable Glow won very well last start and has to be in this.