Posted by: Neil Davis in Results, Selections October 31, 2019 Comments Off on Friday November 1 selections below 709 Views

Some tricky early races but the last four races looks like we can make a dollar. I’ll post an update by noon. No Quality bets so far.

7.Antipodes also fourth up and a better track will suit and Rosie takes over from the apprentice.

1.Challa  ran some good races last campaign in stronger fields rating well. Trialed up well for 2nd. Not a big fella but has a quick action and suited to 1100m fresh up. RP $2.40, $1.90FF

4.Streak Of Power led and won under a ride in his trial on a wet slushy track. Drawn to be the main danger.

4.The Green Dragon raced in strong fields last campaign and if ready, is the one to beat.

5.Craftyaffair  two good placings and fitter now. Drawn to be the main danger.

1.On The Nighttrain  ran some good races last campaign without much luck. Wide draw no help.

2.Blue Arrow ran some good races last campaign and drawn to get a good run.

1.Rangitata  looked very good running home last start from well back in a strong form race with the 4th and 5th horses winning well since. No trials but scratched from a recent wide draw for this. Drawn to land in the first 6 and from there, looks too good for these. RP $1.90, $2.00 FF

The speed map shows early speed from inside and out so should be an even tempo suiting all runners. 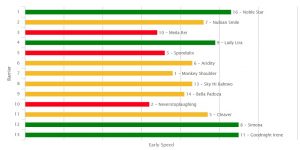 6.Aridity has raced well in R72 and R82 company on Dead and better tracks. And her times and Formpro Ratings are the best in this race on a Dead or better track. So stepping back into  R65 class second up where she battled on ok for fourth on a heavy track, means she is well placed. She has run close seconds, second up, in her last two campaigns and has drawn to get a good run about fifth or sixth. She has been training well and is a good upset chance.RP $6, $18 FF

9.Lady Lira  is the favourite and you can see why: she gets 3kgs off, is third up, the blinkers go on and drawn well. Plus she ran a good second at Hastings behind the smart Mr Universe. The Baker/Forsman team place their horse well through the grades and this is a good example. She will appreciate the better surface as well and looks stronger.

1.Monkey Shoulder  is a nice horse and is likely to need this with more ground being his forte. Will likely snag from the draw and run home well, so the harder they go, the better his chances.

2.Neverstoplaughing unwound late last start to just get up in the slowest of the four 1400m and this is a stronger R65 field. Over the same distance and drawn wide- looks like he needs more ground now though and drawn to get back and have to do a fair bit if extra work to get into it.

13.La Mia Sirena  game 3rd last start after being wide. Drawn wide here but with a good ride, should be in this.

1.Tubthumping  was backed as if unbeatable fresh up and battled. Better track will suit. 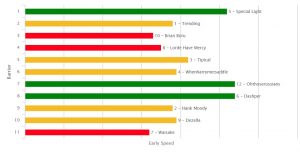 Confidence: 2/5 where Tipical is a false favourite and the map says DSashper and Special Light should get winning runs up front.

5.Special Light  has won twice at Ellerslie on Good tracks beating nice horses. Only second up here but is likely to trail Dashper and being from the Pike stable and the clue is the blinkers going on, so will be fit enough to win with Samantha Collett on board. RP $3.80, $5.50 FF

6.Dashper  if left alone will prove hard to catch. Has done the ratings to say he can do it with Lisa Allpress on board. RP $4.50

4.Whenharrymetsaddle  rates well on a better surface winning an R72 race over 1600m at Trentham. Had two runs back now and fitter. needs to slot in close to the above two to beat them.

3.Tipical  is in good form but it has all been on wetter tracks and his win was against a wek R65 field two starts back. His action says a slow or worse track suits so $4 is too short.

7.Waisake  gets 3kgs off and is being set for longer races. Will get back and the moderate tempo will likely see him running home late.

The speed map shows Run Like Boo leading and not a lot of pressure meaning a moderate tempo. 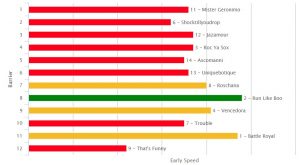 2.Run Like Boo  fought on well in a strong field last start after working early wide. 2000m should suit as her grand dam, Freequent won a 2500m St leger and looks the likely leader. If Lisa can get away with a soft one, which looks likely, they can hold these out. RP $3.50

3.Roc Ya Sox  ran on late fresh up and has shown the ability to win at least one more race. If he can land in the first 6, he will be in it.

1.battle Royal will appreciate the better surface and will likely land second outer and be a chance from there.

7.Trouble ran on well last start over 1600m but had his chance. The 200m will suit better but likely to get back from the wide draw and with a moderate tempo likely, struggle to run down Boo.

2019-10-31
Neil Davis
Previous: Thursday preview below
Next: It has taken a while, but they are back!