Posted by: Neil Davis in Results, Selections November 7, 2019 Comments Off on Saturday 9 November preview below 1,310 Views

The suggested quaddie for Flemington is: ( no further bets)

Good weather and decent tracks will make for great racing today. There are two Quality bets detailed below and I’ll post an update by 1 p.m.

Value bet of the day Riccarton Race 7 Run To Perfection  ( Update Monday: He was paid out at $2.50 for fourth (image below )because the TAB had a special I was unaware of that paid back to 4th place for a place on FF betting so a bonus 7.5 units returned! 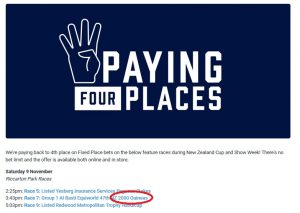 Two ways Catalyst can get beaten on Saturday revealed in Heads Up here  We also have the question where you could win a $40 multi if you answer a question about the 2000 Guineas.

1.Maid Of Ore last start at Randwick drew out and worked her way way over with natural speed to land second outer. They didn’t go hard and she relaxed well. After balancing up she showed a very quick action and sprint to get up in nice time and her previous speed ratings says she is going to win more races. That was a BM 78 where she was 4 kgs over the minimum. She drops into this Set Weights race perfectly with 60kgs minus the 3kgs, placing her on 57kgs, just 1.5kgs above the minimum, and this is certainly no harder. She has drawn wide but there is not a lot of speed and with her natural early pace, she can slide over and get 2nd outer or even lead, and looks very hard to beat from there on a moderate tempo. RP $1.70, $2.40 FF

2.Slavery  looked good pinging the gates in his trial to lead clearly and kept up a nice gallop to bolt in beating Trident who won on debut at Ellerslie. Drawn the inside and should lead or trail from there. RP $5, 6 FF

1.Mongolian Heaven looked very ready to win at Tauranga but after getting a good run, faded out. He has no gear changes and there was nothing reported in the stewards report as to why. Maybe it was second up syndrome or racing right handed. Anyway, his run here fresh up was very good. If he reproduces that, he can win. RP $4, $5.50 FF

7.Aalaalune  just finds ways to get beaten. Drawn wide and will probably find another way although Ryan Elliot is riding like a maestro at the moment.

13.Soft Hearted  run down by a very good horse last start. With a good run from the wide draw, is the one to run down.

1.Heart Of Soul   fought hard fresh up and is a nice galloper. Could lead and be harder to run down.

6.Katie Perrie ran a top 4th here last start when caught back 3 wide in the open from the wide draw, yet was still able to find the line strongly. She won this race last year then went on to run a close 4th in the Dunstan Feeds final. Drops back in class here from a good draw so looks well placed now fourth up . RP $3.50, $4.60

9.Yatima  had her chance last start and closed of well for second. Fitter and with a good run, looks the main danger.

3.Pep Torque  gets 2kgs off and also drops in class.

1.Ferrando  has looked ready to fire fresh up after two good trial wins. Has 60kgs but should get the lead and can’t see anything stupid enough to take him on, so he can lead all the way on a decent surface. RP $2.80, $2.40 FF

4.Media Sensation gets a decent weight advantage over Ferrando and is ready to fire fresh also. Awkward draw though.

1.Appelido looked good last campaign. Comes in without a trial but will be ready. RP $5

9.Lady Rudolph  is a good mare and if they go hard and she gets the gaps, can win.

6.Showdown  won at this meeting last year over this distance second up. Drawn to repeat.

13.Coventina Bay has been impressive on wet tracks running superior sectionals. The question is will she be as good on a Good to Dead track. her last win was on a Slow track at Wanganui. She does have a quick action and this track does have some give in it being sand based. She has drawn to land midfield behind an even tempo and get her chance. RP $4

5.Pullyoursocksup  won very well last start and drawn to get a winning run.

6.Savette  is a nice mare and ran on well fresh up. Looks a definite improver.

2.Mr Universe has run two strong placings and is ready to win. But likely to get back at least 3 back inner and with the kickback here, that doesn’t exactly instill great confidence. RP $4.50, $4.50 FF

1.Tavi Mac  is a good horse and gets 3kgs off from a good draw.

3.Evalina has won in Austalia in very good times. Ready to fire fresh up.

1.Frankie The Fox has finally got into winning form. He has shown that he has had that in him, so with 3kgs off, can get the hat trick. RP $3.5, $4FF

1.Capadonna  ran a close second here last start in a handy field in a good speed rating. Lisa Allpress will need all of her skills to win from a wide draw, but looks the best horse in the race. RP $3.20, $3.60 FF

11.Wekaforce  is in great form and will be on the pace. With a fitness edge over most of these and the light weight, she can hold on. RP $5, $7 FF

5.Duke Of Plumpton was very impressive on a heavy track last start. Just seems to have really switched on now and will be hard to beat again. RP $3.00, $2.80 FF

1.Catalyst is going to show why he is the best three year old we have had for years. His times and sectionals have consistently been superior older horse and better class races which is very rare. Should lead and take bad luck out of it and win by at least two lengths. The two negatives with him are that the last horse to win off a 35 day break or more was Jimmy Choux in 2010. And two of his three starts this campaign he has been closer to the rear of the field than the front. It was only because he drew wider that he could use his natural speed to slide up and lead or get 2nd outer.  Troy Harris knows him well and just like Craig Williams did in the Melbourne Cup, his first task is to jump him well then the rest should take care of itself. If he doesn’t, he could be trailing or even three back inner, but he should still be too good as long as he gets the gaps inside the last 10 metres 🙂  RP $1.20 , $1.20 FF Good luck to all the subscribers who jumped on the $4 before his Ruakaka win – seems like the best overs this year!

‘He is currently $4 for the 2000 Guineas and is being aimed at that. The only horse I can see testing him is Holy Mongolemperor but I’m picking he will be aimed at races in Australia, so if Catalyst wins this comfortably as expected, he will come in, so the $4 is worth taking now‘

6.Run To Perfection last start had to be good to run the sectionals he did of 34.86 and 11.84 ( second fastest all day all day in the second best speed rating.) He drew one at Avondale and showed enough speed to say he could trail Catalyst here, or at worst be three back inner. There looks to be an even tempo here and he is built to run out a very strong 1600m, so he can drive home strongly for second with a query over his main dangers around him. Looks clearly the best chance to run second to Catalyst. A Dead track is ideal for him. RP to win without Catalyst in the market $2.50, he is paying $5.50 ff with Catalyst out of the market.

2.Harlech was very impressive winning at Te Rapa. Run To Perfection was just as good though and only the draw makes it hard for him.

3.Callsign Mav chased home Catalyst at Hastings and there was a gap to the rest. I have my doubts with him in an evenly run 1600m in the last 100 metres though.

3.Lord Louie  was an impressive debut winner and was run down by a good horse last start. Johnson should be able to get in behind a decent tempo and time his winning run. RP $5, $8 FF

14.On Show  will find this easier and drawn well with the blinkers on.

5.Somewhere Man  look a decent chance from the good draw.

11.Solsefei ran a  close fourth at Hastings last start with the slowish tempo against her. She is a natural stayer having run 2nd in the 3200m Chalmers at Trentham. Gets in on a winning weight from a good draw with Lisa Allpress up. $RP $5, $8 FF

5.Felaar wouldn’t be here unless he was ready now. Will get back and eat up the 2500m. tongue tie goes on which indicates he may have ha d a breathing issue last start.

3.Nymphe Monte ran on late last week and will be fitter for this.

12.Humble Pie won very well at Awapuni and is going to relish 2500m with a light weight.

3.I Am A Rock  is racing very well and has to be in this.

2.Roll The Dice  if the inside is still ok, could do it.

7.Billy Mav  is third up after a strong run last start.

13.Gloss beat home I Am A Rock last start and needs to be in quaddies.