Race 4 Fire Dancer $1.90 to beat Nudge Bar who has drawn wide, is second up, gives Fire Dancer 2kgs who should get a better run and is fitter third up.

Race 7 Flourishing $1.80 to beat Nomoathaj who is a bit one paced, gives 2.5 kgs to Flourishing.

12.Nothing Compares  closed off with a sustained head down finish last start and was squeezed up late. 1800m in a slightly weaker field suits. RP $2.80, $3.40 FF

8.Princess Jenni ran a top second here two starts back setting a good pace and fought hard. Forgive her last run and if she can begin well, could be on pace and a place chance at nice odds.

1.Krakadeel  two solid placing but drawing out with a short run to the first turn makes him hard to take at $2.40FF

13.Plucky Miss ran on late in her recent trial with head down with a nice staying action. 1800m will suit from a good draw.

6.Enduring Love has had a few goes and has an awkward draw.

6.Madam Hass is ready to fire on debut after a good trial win.

10.Fire Dancer  very good run for fourth here two starts back, and ran on well on an inside biased track last Sunday. Fitter and drawn to land closer and be harder to beat. RP $4.50, $7 FF and a solid eachway bet.

9.Missandei  looked a definite improver after a game second fresh up.

1.Shady Grey top run last start 3 wide in the open and fought well for fifth not losing ground on the first few. Needs a good ride but if it gets it from Lisa Allpress, can win. RP $4.60, $6.50 FF

The speed map shows Delle Quartza and Miraculous wanting to lead with 1-4-6-7-13 drawn inside them wanting to kick up and hold a position behind them ensuring a fast first 400 metres and an even pace at least. It may suit closers.

4.Flourishing has rated around 99 and 100 in stronger R72 races. Fresh up she was ridden quietly from a wide draw after beginning awkwardly but charged home for third in a race favouring on pacers in 34.4 which in the context of the day was above average. She will be fitter for this and maps to get a winning run about 5th or 6th outer behind what should be at least an even tempo. Being out of a Zabeel mare, the smart La Fleur, means 1800m will not be an issue. Gets 3kgs off which has to be a plus. PFR 100, NTR 87, Diff + 3, RP  $2.80, $3.90 FF

6.Crafty Eva rated 99 last start second up and rated 100 3 starts back at Hastings over 1600m. May snag from the draw and flash late.

The speed map shows no obvious leader but with a big field and even tempo is likely. 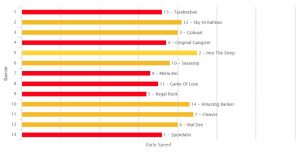 11.Game Of Love last start second up at Tauranga began ok but eased back to last and was late getting clear, but once she did, put in some telling late work, so much so that George Simon said, “Gee, Game of Love has been big!” She rated 96 for that but rated 102 fresh up last campaign in a stronger R72 race. Third up now and Sam Collett will be keen to make amends for the last two rides. PFR 100 NTR 97 Diff + 3 RP $3.80, $4.60 FF

3.Gobuyit from the good draw and with Lisa Allpress up, look the main danger.

10.Savastep  looked like she would be better with time. trialed well and ready to fire fresh up.