Posted by: Neil Davis in Results, Selections January 6, 2020 Comments Off on Tuesday preview below 811 Views

5 winners from 7 races on top, including the 4 x 3/5 Confidence bet races

Head to heads: Just the one with confidence today.

A fine day at Matamata on a Dead 4 track so there is likely to be an upgrade. There are a few 3/5 confidence bets but there is little value in them so they aren’t Quality Bets. And that’s why we have made a good long term profit with them, because we have stuck to value Good Confidence bets. I’ll post an update by noon with any other bets.  I’ll also be posting a full review of this meeting by Wednesday night. Otaki’s will be posted by 5 p.m. tonight.

With it being out 10m, it normally favours on pace runners.

The speed map shows Felix Faure setting an even tempo with Mighty Connor and Te Waewae Bay landing in behind. An even tempo likely suiting all runners. 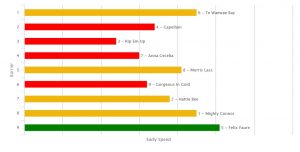 2.Hattie Bee  was confidently backed to win last start here and almost justified that confidence with a strong finishing second. She was unlucky before that and is right in this with the way she is going now. The negative is she doesn’t win too often.

4.Capellani  better run last start when a fighting third over 1600m. Has won over 2000m and maps to get a good run.

7.Anna Cecelia tough third 3 wide in the open two starts back and fought hard for third.  Fair run in a harder R65 field last start and drawn to be a chance over ground.

The speed map shows Tokorangi leading and a moderate tempo likely from there suiting on pace runners.

2.Tokorangi 1st $2.30   looked good running second over 1200m on debut at Te Rapa over 1200m. The winner, American Princess looked good and she got all favours in the trail. Tokorangi will appreciate dropping back to 1100m and from the inside draw has shown the speed to lead and I can’t see anything taking her on and she is likely to get a soft midrace sectional which will make it very hard for the others to catch her with the rail out 10 metres. RP $2.00, $2.30 FF

5.Scala Sancta  in her trial drew wide and blundered and almost lost the rider over the top but recovered and got back. She loomed up wide with 200m to go and battled late after that extra effort to get handy. Drawn to land handy from 3 and be a quinella chance.

3.Angelina Lauro  has a quick action and won her trial trailing from an inside draw and driving home along the inner to just beat a 2yo that has won its previous two trials. Drawn 4 and I doubt if she can cross Tokorangi from there and maps to settle 2nd outer or 1×1. I don’t feel she has the strength to run down Tokorangi from there, especially with Tokorangi getting a softish lead.

4.Perfectionist in her recent trial drew 2 and didn’t show much early speed drifting well back but ran home nicely late with a nice action.

1.Mongolian Condor didn’t show a lot of early speed in his trial and got back and battled away for about 6th in his trial. Drawn 5 and likely to settle last and with a moderate tempo likely, find it hard from there.

The speed map shows Petite Rose leading and with Vicenza out wide with the only other early speed, Phantom Witness may elect to slide over 2nd outer depending on how he jumps.

Confidence: 3/5 with how Phantom Witness jumps and how Opie rides him being the interesting part of this race.

4.Phantom Witness 1st $2.20  looked good winning his trial when beginning evenly, settled 5th inner, loomed into it wide 300m out under his own steam, led and won easing down. Nice looking galloper ready to win on debut. Drawn wide but after doing the speed map of first starters etc, there isn’t a lot of early speed apart from Petite Rose and Vicenza, so Opie, who does his homework on speed maps, may elect to go forward and be a decent chance of landing 2nd outer without doing too much work. If he snags back, he may be in danger of getting caught out by a moderate tempo up front and have to come wide. From 2nd outer, with a moderate tempo likely, he is definitely the one to beat. RP $2.20, $2.30 FF

10.Midnight Magic 2nd $2.10   in her latest trial settled 7th inner and after getting out late, worked home very nicely for third without being pushed too hard. She showed good early speed to win an earlier trial before her debut so from the inside could land in the trail and be a chance from there.

3.Qiji Spirit ran home well against better horses last campaign rating an FR of 102 and 98 which would win many R65 races. Ran on full of running in a recent trial for third after being held up. Drawn to land 3 or 4 back inner though and being a big horse, with the moderate tempo likely, he may get out too late to wind into his work, which he needs to do, to get over these.

8.Arya Stark  ran on well for second here on debut from 3 back inner. Should be improved with that too.

12.Chasing Waterfalls  in her trial got well back but worked home late with a nice action. If they go hard, could get into it.

5.He’s The Man  had a quiet trial where he landed 4th outer and wasn’t asked to do anything looking full of running. Nice looking 3yo ready to go.

9.Petite Rose led on debut and was run down by Callsign Mav. Second up drew wide and had to work to get 2nd outer and tired. Maps to lead and if Tiger gets a soft time, could hold on for a place with the 2kgs off.

The speed map shows six runners looking to lead or be close to it ensuring a good early tempo and an even one at least, suiting runners with cosy runs or off the pace. 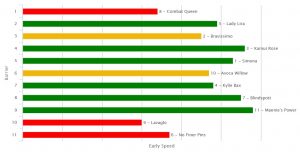 3.Kainui Rose closed off very hard late for second here last start second up. So third up and peaking, with 3kgs off, she looks well placed to land about 4th or 5th with a cosy run, and be hard to keep out. She won third up here over 1400m last year and gets 3kgs off this time from a good draw. RP $4, $4.50

5.Lady Lira  did well here when 3 wide in the open and was run down late by Kainui Rose and Indah, who has won since. Drawn well so could try and hunt through and lead or trail and be right in this. Meets Kainui Rose 2.5kgs worse off than last start but did more work than her.

8.Combat Queen  won well last start and although up in class, will likely land 3 back inner or even 4 back inner, but the good tempo will suit her allowing her to get home late if the gaps come and be right in it.

2.Bravissimo  strong second two starts back and outclassed in a strong field at Ellerslie when 3 wide in the open. Drawn to do less work and this is easier.

1.Simona ran second in a weaker R65 field last start. This is harder and she is giving weight to some nice horses.

The speed map shows no obvious leader but quite a few who will be looking to be on it so an even tempo likely suiting all runners. 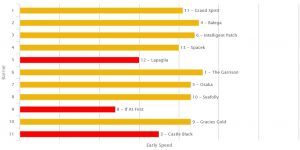 5.Osaka 1st $2.00 strongly backed on debut here and after trailing the leader, who backed off the speed midrace, he was held in a pocket till the leader sprinted and got a winning break. he worked home nicely for second. So the step to 1400m looks ideal and if Jason Waddell can land him in a good spot, which he usually does, they do look hard to beat. RP $2.50, $2.80 FF

1.The Garrison  battled on well for second last start but had his chance and it was the slowest of the three 1400m races by far. So the $2.80 is too short.

8.If At First  ran some nice races last campaign and ran an improver’s fourth fresh up behind The Garrison

3.Castle Black  fitter after an improver’s run fresh up.

13.Spacek  in her trial drew wide, snagged well back but ran home nicely for 4th in tight room. Ready to go on debut and 1400m will suit.

The speed map shows  Tweedledee and Sagunto likely to cross over and shre the lead with maybe Sagunto pressing on to lead. An even tempo likely, suiting all runners. 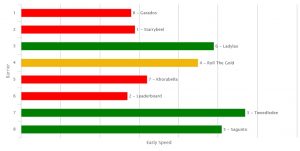 7.Khorabella  two starts back at Te Rapa put in a big effort to come from the rear and get up for third in a fast run 1400m with some good form coming out of it. Ran on well here late last start when she got too far back after snagging from a wide draw. Drops to a winning weight here  and maps to land 5th outer and be in an ideal place to use that light weight to advantage. RP $6, $10 Ff

5.Sagunto looks the leader here and dropping back to 1600m means he can set an even tempo and try and get a break on these and his race fitness could mean he can hold on and good value.

2.Leaderboard  is a nice galloper who won well at Riccarton but may need this with the 55 day break with bigger things in mind at Trentham or Auckland coming up.

3.Tweedledee  goes his best races here and had little chance last start back off a moderate tempo.

The speed map shows Southern Vogue and Blizzing away out wide likely to go forward with megahn getting a good run in behind. a moderate to even tempo likely. 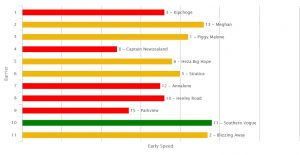 13.Meghan 1st $2.20   last start showed early speed to work over and trail and relaxed well. The leader sprinted before the turn and she was  a bit flat footed but once balanced up, stretched out strongly right to the line in good time for the 1600m. Looks like she will relish the 2000m and drawn to get all favours. RP $3.00, $3.10 FF

8.Captain New Zealand  fought well for second giving the indication that 2000m is what he needs now. Drawn well but has been getting back in the 1600m races. needs to jump and land closer othwise may get too far back in what looks to be a moderately run race.

3.Kipchoge was hampered badly early here last start and unsettled him early. He ran on well for fourth after getting in tight quarters down the straight giving the good impression he will be greatly improved by that first run over ground.  Very good trainer and from the inside, should get a good run.

5.Stratius looks like he is looking for more ground now and with a good run, should be in it.

1.Piggy Malone  has had plenty of goes but seems to fine one too good often. Drawn to get a good run and place again.