Posted by: Neil Davis in Results, Selections February 27, 2020 Comments Off on Saturday, 29 February preview below 876 Views

At Flemington, Catalyst looks a good bet on the tote. He has improved more than Alligator Blood and trainer Clayton Chipperfield, mentioned he has his companion, Bruce, accompanying him to the races. I remember reading in a book of horse behaviour that having a companion with a horse was a very strong factor when finding a winner. He maps to get the ideal run in the 1×1 and is a better horse chasing down horses from cover. I really do think he can win this race but the $2.40 is too short. I’m sure you will get a better price later on as he is longer ( 2.90 )  than the current $2.40 on other markets. So backing him on the tote could be the way to go. He is not a Quality bet as  the one I’m really scared of is 3.Alabama Express after his top win off a tough run against older horses. The quinella with those two look good.

Suggested Flemington Quaddie for $52 for 10%

Ellerslie has come up a Dead 4 and likely to get an upgrade later on. A terrific day of racing here and in Australia. I’ll post an update by noon with any other bets.

Ethan, who won the Heads Up question last week has a $20 multi with Star Tsar to win, Run To perfection to win and Dama Zorro to place ( First 4 ) to return $341

The speed map shows Thomas Aquinas very likely to lead with the blinkers going on. Playsameanpinball has raced on pace before and may slide up and get 2nd outer. An even tempo is likely. 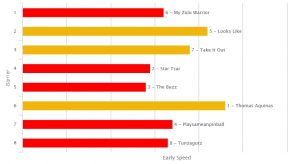 2.Star Tsar on debut was impressive winning from last and in good time. Then second up, drew wide, began evenly, then snagged but was caught 3 wide in the open. They eased the tempo up front so he had no choice but to ease forward and loomed 300m out and didn’t lose ground against the the winner and second horses. The fourth and fifth horses have since won. He is an impressive looking galloper out of top mare Zarzuela and from the better draw, he can land about 4th or 5th behind an even tempo, and he just looks too good for these. RP $1.70, $2.50 FF ( 4.5 units at $2.50 FF )

1.Thomas Aquinas  is likely to try and lead and put pressure on them 600m out to make it a true test. The 3kgs off will help but can’t see him keeping out his stablemate, Star Tsar.

3.The Buzz  was a bit unlucky here last start when held up and ran fourth. Should be a good place chance.

The speed map shows Bully Boy, All In Vogue and Final Suggestion sliding over 2nd outer. A moderate to even pace is likely.

3.Starrybeel  disappointed in the Avondale Cup but this a big drop back. If he can repeat the previous run, he should win this, but it is a big if.

2.All In Vogue  maps to get an ideal run in the trail and is coming back into form.

6. Dance Card  just won last start and gets in on a nice weight.

The Speed map shows Willyway and Shoshone likely to share an even tempo.

1.Packing Rockstar  looked good winning fresh up and battled on the wet ground last week. The better surface will suit from the inside draw.

1.Victory Glory  is learning more each start and won well at Gisborne. Nice horse and can be in this.

7.Triomphe  has had a freshen up and if they go hard enough, could surprise.

The speed map shows Shipshape and Manchu going forward with a few looking to be handy so an even tempo likely.

3.Riding The Wave  showed that he can unleash when ridden quieter. If he can do the same again, which looks likely, he is the one to beat. RP $4, $5 FF

1.Acutus  was a dominant winner last start and gets 2kgs off from a good draw.

4.Veine D’Or ran on strongly fresh up. The trainer told me she would definitely improve with the run, and we know she is a good mare with the right run. Drawn the inside here and should get that right run – maybe third up could be the time to get on her.

The speed map shows Tweedledee and Iron Eagle going forward with a few wanting to get in behind, so an even tempo likely.

11.Swords Drawn from the good draw can settle 3 back inner or outer behind the even pace and based on his sprinting ability shown in his sectionals, he can dash past these fresh up with the light weight. RP $3.00, $3.00 FF

6.Jip Jip Rock  also gets in with a light weight and looks the main danger. her last win was here over this distance.

10.Iron Eagle  will feel the 5kgs weight drop and should land in a good spot.

The speed map shows Amal Rose going forward and a few others looking to settle in behind on a moderate tempo.

1.Bergamot  got too far back last start and ran on nicely in tight quarters. Goes well here as she showed with a game second to Two Illicit. Drawn to get a good run and be the one to beat. RP $3.20, $3.40 Ff

9.Communique  ran on late here last start behind Karalino and this is easier- nice galloper.

3.Karalino ran a very good fifth against the best 3yo boys here last start. Drawn to get all favours and this is easier.

2.Run To Perfection ran a top second to top horse Catalyst here last start over 1200m. He has been freshened up and goes well that way. There looks to be a good tempo in the race and from the wide draw, he just needs to look to snag back and get a track into it, and with his superior acceleration and strength, looks well placed at Set Weights to beat these. RP $2.00, $3.10 FF ( 4.7 units at $3.10 FF )

The speed map shows plenty of early speed so a solid tempo likely setting it up for a closer.

7.Spring Heat  maps to get back and be that horse that flashes home to win. Just like she did here fresh up in November in fast time. Top run in the Telegraph for third flashing home. Gets in on a winning weight and looks hard to beat. RP $4, $5 FF

8.Dama Zorro  with a fresh up and a nice trial, should be able to get the right run and be charging late.

6.Pretty To Sea  was a bit unlucky here last start and will also appreciate the fast tempo and be getting home late.

4.Sheezallmine  drawn to get a good trip after she was a bit unlucky here last start.

The speed map shows Peloton, Red Rufus and Vladivostok looking to lead or be on it. Peloton is better in front and is likely to set at least an even tempo with his stablemate, Tibetan, well back needing a good tempo to win. So it is going to be a true staying test and a good run is going to be needed.

1.Dragon Leap  has always looked like a top three year old right from his debut run. His times and closing sectionals have been superior to older horses and over shorter distances on the same day. He looks the part and relaxes well. The trainers are confident he will stay out a truly run 2400m and so am I. The negative is the tricky barrier draw of 12. The positive is he has Jason Waddell on board with a good run to the first bend and plenty of speed on inside him early on to be able to get in one off somewhere. So with a truly run race, where he can relax probably behind midfield, he just needs to pick a path through tiring runners before the turn, and I’m confident he will win this. RP $2.20, $2.40 FF

16.Two Illicit  showed with that last win at Te Rapa, where her time and closing sectionals said she is a top class filly, that she is the obvious main danger. She has drawn well but that may count against her and get a shuffle up if she can’t clear traffic when the pressure goes on 800m out. If she does, with that 2kgs over Dragon Leap, she will test him, but I do feel his extra strength will be too much for her. RP $3.00, $2.50 FF and I think she will drift out from that.

3.Scorpz  is tough and been racing strongly against many of these and beating them. The plus is he has drawn 2 and that means he gets a good run near the pace which is often the place to be in this race. Visor Blinkers go on after being off for his last two starts – had them on in his three previous wins so it could be a master stroke from Stephen Marsh to put them back on.

5.Tibetan  races like a stayer and his closing sectionals show that he will relish a solidly run 2400m. Drawn wide but will drop back and hope his stablemate, Peloton, sets it up for a closer like him.

The speed map shows Special Light and a few others on her inner looking to go forward. A moderate to even tempo likely.

2.Shezathinka  ran a solid second in front of Gravitelle here and ran a game second in the Lowland Stakes ( 2100m) at Hastings. Drawn out and will need to work to go forward.

9.London Banker won at Te Teko but in a slow speed rating and is likely to get back. Nice galloper though.

6.Rip Em Up ran on well last start. Gets back and relies on a solid tempo which is unlikely here.