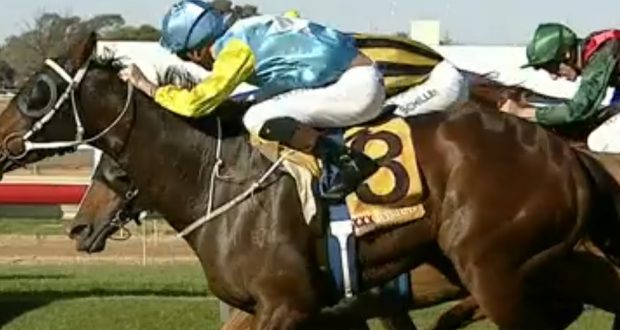 The sectionals off the front can be seen here showing tempo and speed ratings.

The wind was a strong westerly wind on Saturday. Hugh Bowman said, “I think the wind has played a big part. It is making hard for those forward runners to sustain their speed…”

It was a westerly wind giving a strong head wind from the turn and inside runners to the turn.

Blackbookers are in Bold Italics

Tempo even suiting all runners – head wind front straight. Some very good form to come out of this.

Macroura was strongly backed in and was well ridden by Rachel King with the whip in the left hand as she ran out when she won last start. Learning all the time and looks good. The SR ( Speed Rating ) was strong too.

Wild Ruler  jumped fast so went forward and got a bit keen. After leading into that wind down the straight he did very well giving 4.5kgs to the winner. I allow 2.5kgs per length over 1200m or less so he was giving away a 2L advantage to the winner and would have to improve off that too. Plus he looks a better horse with a sit so he is heading for Brisbane and at set weights is going to be hard to beat.

Newsreader jumped well but the rider took a hold and snagged her to 9th outer then ran on well with a good stretch as though 1200m and more will suit better. Best L400 and L200 so one to watch out for.

Ballistic Lover couldn’t match them for early speed and got back inner but closed off well and was tightened up late.

Sancy did very well after bounding at the start then wasn’t rushed after doing its chances then tailed the field by 5L. But she closed off well in the fastest L600 in 33.32 for the race.

Tempo was fast for the first 400m, then slowed midrace then sprinted again 500m out. Suited all runners.

Yonkers got the race run to suit. When Chris Waller said Hugh Bowman was going to put the pressure on well out to avoid a sprint home, that is you wanted to hear if you liked him. He just got up though, and the SR was just average. But he does look better over more ground and he was giving 5.5kgs to the runner up.

Gone Bye was strongly backed and almost got it done. He was taken on for the first 400 metres before getting 12.37 and 12.67 200m sectionals midrace. But to just go down after working hard early says he will be hard to beat next up in the right race.

New Arrangement was held up from the 100m and looked to have a bit to offer. He will be third up next start and Chris Waller should be able to find the right race for him third up which he excels at with a 15.3% overall strike rate.

Tempo was moderate suiting runners in the first half of the race. The Speed Rating was slow at 92 and they went out 0.41 seconds slower than the BM88 race and came home 0.65 seconds slower so unlikely to be a strong form race.

Laughing Or Crying  got all favours and ran home best along the rail. He had a 5.5kgs advantage over Jailbreak which is almost a 3Length advantage so with that run had to be hard to beat when they levelled up 100m out.

Jailbreak  got the perfect run and should have put them away but just fought ok for second, showing 1200m is his distance.

Foxie La Belle has her best form over 1200m or less and got every chance.

Toro Toro would also be better back to 1200m.

Temp even suiting all runners.

Fituese  showed good early speed to get handy and although 3w in the open, relaxed well running their first 400m in a good 23.07. She responded really well when asked to go by Rachel King, who is riding very well and won a very good SR of 116. 2nd fastest all day. Rachel said she is virtually push button as she relaxes anywhere for her, so looks to have a good future.

L’Cosmo ran on well after getting in a pocket midrace and ran on strongly for second.

Brazenpine  ran on well from last for 4th. Fitter now and from a good draw in a dash for the cash race, should be harder to beat.

Dirty Work got the perfect run behind the fastest tempo all day ( 11.45 200m to the 600m ) and the fastest SR all day of 119, so should prove a reliable form race. He’s only a 3yo and has just kewpt on improving since he came back to Sydney.

Burning Crown  did very well sitting 4w in the open, protected from the wind, loomed up on the turn and only tired in the last 50 metres – a top run second up and won’t be too hard to place next up.

Forgive Intrepidacious as she ran without some plates and got stirred up before the start trying to be re-plated and was caught wide.

Up Trumpz  flew late for second after being held up. Runs a lot of placings though.

Tempo moderate as was slowest 200m sectionals 12.22  of the seven races 1400m or less and suited on pace runners. First two a class above these nothing coming from the back.

Rocha Clock deliberately snagged to last and relaxed much better than last start. Tracked So Taken up and with a 2.5kg advantage, about a length, was able to level with her 100m out and draw away from her to win well ( L200 11.08) . Slow time but she was dictated to by the tempo up front. She has run good SRs before and looks stronger now. Even if she were to meet race rival So Taken again with a swing in the weights, she would still beat So Taken as she was only having her second start back from a spell and Lizzie said her coat had improved markedly from her  fresh up run and still looked for a bit improvement out of that run as well. So Taken was easily second and should be peaking next up and just needs to be in the right race, away from Rocha Clock, and she can win.

Maybe Stock Up could be harder to beat next up as she was held up when others out wide had their momentum up.

Tempo even suiting all runners.

Hightail ran an average trial with the blinkers off, but the Snowden’s often just get those blinkers on at the right time, and once again proved it. Just won but had to get going earlier than Hugh wanted him to fresh up so he can only improve off that.

Trumbull  had his chance and ran into a good fit horse. Just needs a decent draw to go one better in the right race now.

Hilo just missed the jump slightly and got back but moved forward but was trapped 3w in the open. So to lead 300m and get run down late close up, means it was a good effort.

Ready To Prophet finished last but was a total forgive. She looked in need of the run, wasn’t comfortable among other runners and is much better in front. Rider Brenton Avdulla said she would better off with blinkers and stepped up over more ground. Maybe give her one more then look for her in the right race where she can lead.

Tempo even suiting all runners.

Phaistos  had to snag from a wide draw and got back to last. So he did well with that extra fitness under his belt. His closing sectionals of 33.54/11.44 in context of other tempos and class say he should go on with it. He really wanted to run that horse down in front too despite giving him 4kgs, which is always a plus when he steps up in class and is likely to be on a lighter weight.

Thy Kingdom Come  looked all over the winner and was nailed late. He is right at peak fitness now so watch carefully where he goes next.

Asharani  was late getting balanced up and drove well late. Better suited coming down the outer off a decent tempo. L200 11.81 second fastest of race.

Bandersnatch had to work a bit to lead after 400 metres and fought on well for fourth with that head wind a negative as well. May have missed work after his little injury the week before so, should improve off that.

Hanger did well off a tough run 3w open.

Tempo moderate suiting runners in the first half. This was the slowest rated SR race so be careful with the form out of it.

Wild About Her was given every chance by Glen Boss and looked to be travelling extra on the turn, but so was Juventus. But the 5kg advantage in the weights helped to keep him at bay all the way down the straight. At her last start she only got out late but really found the line hard with 60.5kgs in the best closing sectionals. She dropped to 53.5kgs in this harder field which if you have ever used kettle bells or weights at a gym, you would know 7kgs  is something she would really notice and feel more confident to let down with. Plus she had won second up before, so improvement could be expected and the money had come strongly for her throughout the day. She was the recommended bet 2 minutes out from the race on the updates and helped bump the quaddie to a decent $2,600.

Juventus was giving 5kgs to the winner which equates to 2.5L and was beaten by 0.2L. Reverse the weights and you reverse the result easily.

California Salto  was held up and ran on ok but not a filly I could back confidently.

2020-05-04
Neil Davis
Previous: Sunday Specials below
Next: Greyhounds all go and how to use weights to get an edge