Posted by: Neil Davis in Results, Selections November 6, 2020 Comments Off on Saturday preview below 1,316 Views

2.Stockman is a horse we have made good money off and I’ve been waiting for him to get this distance. His last run showed he has come better than his last campaign when sustaining a strong sprint through the line. He strikes a wet track and the small field will allow him to relax and track into it and blow these away over the last 100 metres. RP $2.20, $2.40 FF 2nd

A very good day of racing. I’ve used the speed maps from Formpro Ratings to highlight well placed runners who should get winning runs. Also, if the inside gores off during the day, you can see from the maps, which runners will be in the right spots to capitalise. No Quality bets today. Aegon was the closest to being one as I feel he is just primed to win over 1600m and should get the tempo up front to bury them late for Leith Innes. Pokuru’s Gift looks perfectly placed to win race 5. Sensei in race 6, if the inside is ok, which it should be, will get the fats tempo to repeat his win in that last year. Lincoln King I’d recommend backing for the NZ Cup at $6 now as he will very likely run a top trial for it today and is the perfect 3200m horse. And James Barrie in race 8 at Te Rapa could stack’em and rack’em in front and prove very hard for the favourite to run down, especially if the rail is is still ok.

I’ll post an update by noon with any head to heads or other bets.

No Quality bets so far.

The weather forecast is for Saturday is: Mostly cloudy. Chance of a shower from afternoon, then rain developing late evening as northeasterlies change southerly.

So the current Dead 4 as at Friday afternoon should stay around that.

The speed map shows good early speed from a few out wide and near the inner giving Zakunda a good run around midfield. 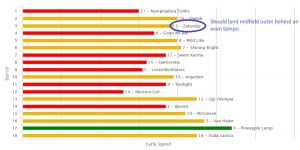 1.Zakunda  got back last start and worked wide to get in to it and fought well for fourth. A typical Pitman trained runner who has been set for Cup week. Nicely bred horse who maps to land midfield behind an even tempo and get his chance to break through now. Rtaes on top after weight adjustments in the Formpro Ratings as well. RP $5, $6.50 FF

13.Mistletoe ran a strong third on debut after being taken on in front and setting it up a good closer like Mister Reliable who is a very good three year old in the 2000 Guineas. Top stable and Matt Cameron is good at getting them out of the gates, so should get every chance. RP $6, $8.50 FF

The speed map shows plenty of early speed with Sunny Lady getting an ideal run.

11.Sunny Lady ran a close second here in February running 1.09.65 and they have been putting her over more ground and just finding it too far. Back to 1200m with a freshener looks ideal and from the inside barrier, should get every chance and is a decent upset chance. RP $10, $19 FF

The speed map shows early speed from 4 runners with Mediterranan Star content to take a sit as he usually looks to take a sit.

4.Mediterranian Star  ran a strong third here at the Cup meeting last year over 1200m running a personal time of 1.08.08 in an R72 race. Has run a few good placings since and did well last start off a tough run here. Drawn to get the ideal run here and get his chance with top rider Troy Harris up. RP $5, $6 FF 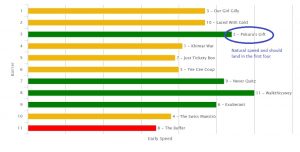 The speed map shows 3 runners ( Exuberant may snag) going forward with Pokuru’s Gift with his early pace, relaxing well about 3rd in an ideal spot to strike. Powerful galloper with Opie Bosson up. RP $4, $5 FF

2.Sensei bolted in here in this race last year off a similar fast tempo. Trialed really well and should land 3 back inner and the gaps should open in time for him to get out and win again. RP $3.00, $3.60 FF 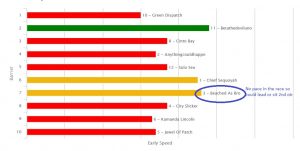 3.Beached As Bro  should go forward with nothing else wanting the lead and with a moderate tempo likely, should be in the right spot to capitalise. He ran a strong second here last start and 2000m is ideal. RP $3.20, $4 FF

The speed map shows  Unition likely to try and lead with Need I Say More 2nd outer and Embers may look to trail or could hunt out and lead making it harder for Need I Say More to get 2nd outer or one off. An even tempo likely suiting all runners.

2.Aegon  was very impressive last start when unleashing a fast late sprint off an even tempo to beat Need I Say More. His last 200m of 11.34 was the fastest all day. His last 600m and 400m was 15th and 11th fastest all day. So to do that means he is going to eat up 1600m and from the draw maps to land behind 8th outer behind Mister Reliable who showed enough last start to give him a track into it and get every chance to get over these.  RP $2.70, $3.20 FF

3.Bourbonaire was outfinished by Aegon at Hastings over the 1400 and it is hard to see him turning the tables over the 1600m. If he gets a better run he could but can’t see it.

1.Need I Say More  is going to have to work a bit to get one off and up to 1600m with more pressure likely, is going to vulnerable over the 50 metres by the two abaove who beat him home at Hastings.

3.Bourbonaire  was just beaten by Aegon at Te Rapa and will likely snag to the rear. If they go hard should be right in this.

The punter who won the TAB $40k bonus bet has Rocket Spade for a place in this. based on his last run at Te Rapa, where he had every chance and was beaten 6 lengths by Need I Say More and Boubonaire, he is going to need a perfect ride by Trot Harris to sneak into third place. Hopefully the gear changes help him out. Good luck to him – certainly adds to the race.

3.Summer Monsoon is and obvious danger. Should get a good run with Opie up.

7.I Am A Rock good run in harder field last start rating well. Drawn to get all favours here.

The speed map shows Splendior leading and many looking to land in behind or even have a go at the lead as some will be caught wide. An even tempo likely. 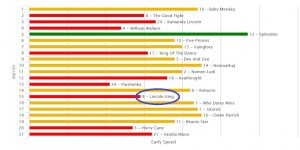 9.Lincoln King  looks the ideal horse for a NZ Cup bid. He won impressively two starts back off a decent tempo then was just outsprinted from the back for 2nd last start. He relaxes well and will go back and look to get a track into it and and be hard to keep out. I really feel he is the perfect type of horse to win the 3200m cup next week – now at $6. He will get in on a light weight, relaxes well and has a beautiful stayers stride on him, plus he can run home in above average sectionals off decent tempos. Worth backing at $6 as he will likely halve if he wins this or runs a stylish race. RP $4.50, $5.50 FF

8.The Good Fight  rates strongly and is in good form. Should do no work around midfield and if the gaps come, is a realistic chance.

18.Asathought  is the up and comer and relaxes well. Very interesting runner.

14.Sorceress  strong third last start in R74 race. Drawn to get all favours.

1.Quattro Quinta  looked very good winning in fast time and sectionals with good manners. He has drawn out here but the small field will suit and he can sit 3 wide with cover and should still beat these. Trialed very well off the pace running 4th under a grip. Wouldn’t want a slow track though with his action. RP $1.90, $1.85 FF

6.Miss Ipenema  gets 5.5kgs off the favourite and drawn to get all favours. hard to see her improving enough to beat him though.

5.Rum won well at Hastings and a bit flat second up. Drawn to lead and be hard to run down.

4.Aalaalune  has been freshened up and goes well that way. Drop to settle 4 back inenr behind a fast tempo which will hopefully create the gaps from the turn for her to fly home. RP $5

9.Oneroa  nice horse who won well last start. Gets 3kgs off and right in it with a good run.

1.O’He Can just the type to upset fresh up Likely to snag and track into it.

The speed map shows Ihu leading. In his last three wins when leading he ran to the 600m fatser than the the field came home from that mark, so an even tempo at least is guaranteed.

5.Coventina Bay  last start here over 1400m got well back off a hot tempo and motored home for a close fifth running outstanding sectionals. She is third up and fitter. With Ihu in guaranteeing an even tempo will give her no excuses. If the race was over 1400m I’d declare a good thing but she will get back and with the kick back and blinkers coming off, and with the Group 2 over 1400m at Pukekohe in 2 weeks being the likely target for here to peak, it has put some doubt into it for me. RP $2.80, $3.00 FF

4.Burgundy Belle  maps to get an ideal run behind Ihu, and I doubt if she will force the issue with Ihu early knowing Coventina bay will relish a faster tempo, and third up from Te Akau is a lethal time to be on them.

1.Endless Drama  is ready to fire fresh after looking spot on in his trial bolting in with a fast time. Drawn to get all favours.

13.Katie Perrie  has run two strong races and will relish the middle distance now. Drawn to get every chance in the first 6 in running and her last win was here over this distance on a Dead track stepping from 1600m. RP $4, $4.20 Ff

1.Paisley Park  won very well last start but likely to get back off a moderate tempo and need luck.

The speed map shows James Barrie getting an uncontested lead. 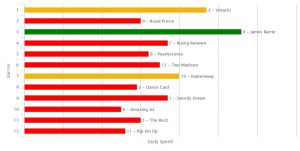 10.Kaareraway did much better stepping up to a middle distance last start and will be fitter for that and gets 3kgs off.

1.Swords Drawn  won well off  a fast tempo last start. Drawn wide here with a decent weight and likely to snag. Moderate tempo will be against.

The speed map shows Our Fine Wine very likely to led and get her own terms.

4.Our Fine Wine should be able to get hr own way in front here. She drops back from some stronger fields and her two wins were here earlier this year when she was able to lead. RP 5, $8.50 FF