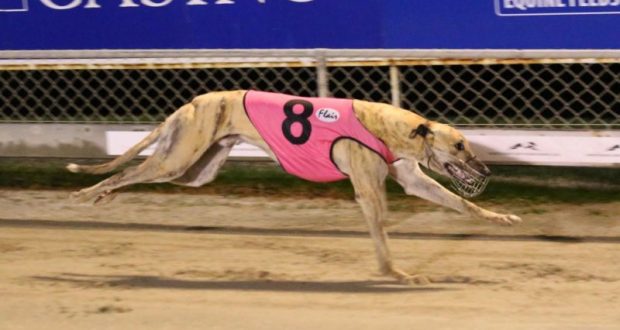 Added one extra bet – Big Time Vegas race 1 at Palmerston North which is a bonus back race.

No further updates but will update after each race.

Another day where the bookies look to have an edge.  Look after your bank as there’s some great racing later this week on Thursday night.

Also, there’s Bonus Back on races 1 and 2 at Palmerston North today.  Please check back by 12 noon for any recommended bets in these races.

The best placed dog today looks to be Big Time Glory race 6 at PN but no value at 1.35.

Next update by 12noon

Additional Bet posted at 11am

Six races covered, three winners, a second and a third so not a bad day.  14.3 units returned for a 4.3 unit profit.  So a good start to the week but to be fair felt there was a little more on offer.  Still on a tough day for favourites, especially at Addington, nice to come out on top.  Back again tomorrow for a 12 race card at Addington.

This looks like an extremely open race – and the bookies concur.  One of the favourites is a dog having its first sprint so really the bookies have no clear idea.  The two dogs on the inside both show up in the opening sectionals.  For Comet, he’s recently downgraded while Marty downgraded 6 starts ago and has had just one draw inside 4 for a second.  In an open race, I think there’s a bit of value around these two enough at half units.

Confidence 2/5 one of them will win

Second and third.  Another close one but just not close enough.  Looked good at the turn.

Not a high confidence bet but if we saw to run and jump like she did three starts back they will only see her dust.  She maps to lead which will help.  Yanira Bale does look right in this as well as does Homebush Rieko.  However, if Fanta can make a quick clear start, she should be too good for them.

Another second.  Ran wide but tough day when a dog with 1 win from nearly 40 starts pops up.

For Spice Spice Baby to win she needs a couple of things.  First, she needs space as she will tend to look to head right.  Second, because she covers more ground she is susceptible to a strong closer.  The sectionals tell us she’s not going to get a better chance – there’s not a lot of early speed and she really looks like she can get out in front.  In this field, she has a decent closing sectional too and it isn’t the strongest field.  Wont be an easy watch but she looks a good chance, especially with her early speed.

She won it off the jump last week and to be fair her best opening sectional had her right in the mix.  She has the two best opening sectionals in the last 90 days and there doesn’t look to be a lot of early speed.  Interestingly, she also has the second best personal time here and she got close to that last week.  Looks a nice bet for the Bonus Back promotion.

Yes.  Never looked like losing.  Thank the TAB for the bonus bet encouragement!

Bookies have the favourite at 3.60 and the outside at 11 so all 8 runners could potentially win this. SOphia maps to lead but hasn’t won her in 9 starts nor from box 3.

A favourite dog of mine but because we know what we are going to get – warts and all.  Would have preferred her a little wider and outside Gwyn but the two vacant boxes help.  She will look to head right and that’s the concern but she has 4 from 7 races in box 4.  Interesting fact 21 starts over 410 – 12 wins, no places.  I’d be a little more confident if she was drawn a little wider but if she jumps and find a little bit of clear air, they won’t catch her.

Confidence 2/5 – only because of the draw

Third.  Was worried about the draw but she just completely missed the jump and that changed the complexion of the race.

Another competitive race but Tommey maps to get the lead or hold the rails and his closing sectionals are strong enough to see him through.  She’s up in class for this which is always a flag but his times and sectionals show he is competitive in this field and the draw is a real bonus.  The main challenges tend to be slow away and that helps.