Posted by: Neil Davis in Results, Selections February 17, 2021 Comments Off on Wednesday 17 February 2021 preview below 491 Views

The money has come for Lucky Shark but he is likely to be 3 back inner behind a moderate tempo so $3.20 FF is too short. Florentia, who looks ready, looks good value at $4.40 FF and Cleverconversation also looks fit with and can place at $4.80 FF. Recommend backing Florentia  4 units for a win and Cleverconversation 1 unit a win 3 units a place.

14.4 units returned off the 8 units with 3 units on Cleverconversation at $4.80 place. Florentia was poor. Lucky Shark proved a false favourite. Sweet Hunter got out past his assessed price of $6 to $6.90 and got his own way in front with a good ride.

It is a Bookie’s benefit day at Te Aroha today with bigger fields on what is likely to be a biased track at some stage. I’ve previewed race 7 in depth and will update it about 2 minutes before the race with how the track is playing etc. I’ve also previewed the late quaddie with a suggested bet.

As at 9 a.m. Florentia and Cleverconversation are the best value. Update by 3.18 p.m.

The speed map shows Sweet Hunter going forward out wide and may lead depending on how the track is playing. Five runners will be looking to be on pace or just behind it. A moderate tempo likely. The inside may well be off by this race but I’d advise to wait and see if considering a serious bet. Inside was ok so the map and tempo worked out correctly. 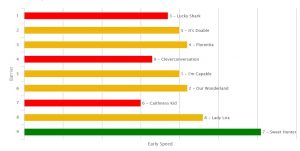 Confidence:2/5 with Lucky Shark being too short, as he maps to be back on the inner in a moderately run race and the inside could be off by this time of day. Saved your money

4.Florentia she won drawing away at Ashburton then ran a top third at Riccarton when caught 3 wide in the open, leading 350m out and was only run down late for third by .7L rating an FR 99. In her recent trial she trailed and never got a clear go at them finishing with a gear or three to go through. The form out of it has been good in stronger fields. Strong 3yo filly whose action says a Slow 7 or better will be fine. maps to land in a winning spot about 4th outer. Slow 7 or better looks fine with her action. Top trainers as well. Weak effort.

7.Sweet Hunter was heavily punted last start off an average trial. She showed good ability on a Good track to win at Avondale but fresh up played up in the gates and missed it and got back wide and in the open and had no chance from there. Won at Tauranga right handed Maps to lead from the outside draw and it just depends on how the track is playing as to whether she leads on the fence or sits outside it if the inside is off. Worked out well and a good ride paying over the assessed price of $6, $6.90 on tote and $6.50 FF

3.Lucky Shark put up a big effort two starts back after tailing the field after a slow start and ran on well for 4th. Then last start over 1600m, was 6th 3w cover and looked likely 200m out but was a bit one paced over the last 100 metres. Maybe dropping back to 1400m will help as he was also a bit keen over the 1600m so the better tempo here will help. The key is his draw of 1. He maps to be last inner which is the perfect place to get beaten here when the inside is off. Opie is on so that will help. So his chances rely on how the track is playing. Every chance.

2.Our Wonderland  last start worked a bit early and led one off which is always a hard place to win from, but he stuck on ok. he doesn’t win too often but if on pace is winning he should be a place chance at least with the 3kgs off. 2nd with a good run

9.Cleverconversation is still a maiden but ran the best race of his career fresh up over 1400m behind Brando and Deep Beauty who have gone onto excellent form when trailing and fought hard on the fence on a Dead 4 track. Four horses that finished behind him have won since. Also ran the best last 600m when finishing a good third behind the top horse Elephant. Last start  he was held up in the straight when looking to have plenty to offer. So fresh up here again with 1.5kgs off ( rider can claim 3kgs but riding ) he looks a realistic place chance despite racing out of his class. There was a maiden 1400m he could have raced in so the trainer must have him right to start him out of his grade. Raced right up to expectations coming from last off the moderate tempo – $4.80 place.

1.I’m Capable won his maiden last start getting the perfect run. He improved nicely off a third before that. Always hard jumping to R65 class with topweight against handy R65 runners though. 5th so class and weight jump did prove too much.

5.It’s Doable ran out of her grade in a harder R74 field over 2000m at Trentham and faded out. her last win was 14 starts ago over 1200m fresh up. Her third two starts back was good. She has the best FRs on a dry and a wet track with good placings in R72 races. She does look better placed back over 1400m but has drawn close to the rail which will influence her chances. Both wins have been left handed and on has two placings from 6 starts right handed. 6th and better left handed.

6.Caithness Kid has all of his form left handed and unplaced in his 3 starts right handed. Best recent effort was 4th over 1215 at Rotorua in a weaker R65 race. Was a well beaten 300m out here last start on a heavy 10 track. Hard to see him in it. Last

1.Seajetz  1st obvious include especially if inside is off. Nice horse.

4.Super Sid  ready to peak 4th up after two good runs with Opie up.

17.Annexception  is ready to win on debut. Wide draw may be a plus by this time of day.

16.Isla Jay  led all the way in her trial win and drawn to lead so if inside is ok, can do it.

2.Lightning Field  is a $3.30 favourite but beatable against some promising types here

The speed map shows Big Time Rita and Big Time Dior disputing the early speed, just as they did here on 3 February in the video replay below. Rita led ok.

1.Big Time Rita 3rd and almost got up late.  as can be seen below, she beat the favourite for this race,  kennelmate Big Time Dior here two starts back. ( Rita Box 4 and Dior Box 7 ) over this distance. Dior tends to want to veer out and stay away from the rail whereas Rita likes to be near it. Rita has the best time of any of these over the 520m and whilst she can be a touch tardy from the boxes she does have fast acceleration after a few strides. The 2 dog is generally slower away and Dior and the 4 dog like to keep away from the rail as well. So she has every chance to drive through and lead or trail Dior and with her going wider on the bends, can use that to her advantage and drive through under her. RP $4.50, $6.50 FF