Posted by: Neil Davis in Results, Selections February 26, 2021 Comments Off on Saturday 27 February preview below 851 Views

With Credit Manager just put that down to being given the wrong riding  instructions. To snag back and look for cover was just the opposite of what should have happened! A good example of why some trainers should do their speed maps properly!

Tough race. Bet is the quaddie suggested in the selections for $67.20 for 30%

A Proper Lady looks fit enough and went down nice and under control $10ew tote. Had her chance. Balance $167

Race 2 Tar and Cement certainly looks the part. On his toes so an even tempo that looks likely will help him settle. Led and bolted in. Balance $187 with the quaddie live

A good day of racing at both venues. I’ll be doing a birdcage bully for Matamata from race 1.

The speed map shows an even tempo with Sagunto likely to hunt out wide to lead with Valetti trailing. An even tempo likely suiting all runners.

Confidence: 1/5 in an open race. The bookies have the first six favourites between $6 and $9.50 and the chances don’t end there.

9.Rusalka took a few goes to win two starts back at Te Rapa but showed it was no fluke with a very good third behind the smart Les Crayeres last start rating an FR 100. She comes in here on a nice weight with 3kgs off and maps to get a winning run. Nice eachway chance. RP $5, $6 FF

6.Sunburst  – her last win was at Tauranga over this distance when dropping back from a stronger R72 race. She drops back from the very strong Douro Cup field to this and with a decent run from the wide draw, could upset.

3.Tar And Cement  was very impressive on debut at Hastings winning in good time and ran the fastest L600, and L400 all day and the third fastest L200 all day. He wasn’t fast away which is going to count against him here but the speed map says an even tempo which is all he should need to get over these. RP $2.30, $2.60 but there may be a 19% deduction as Intelligent Patch is likely to start at Otaki. So the $2.60 will be $2.10.

The speed map shows  four runners likely to look to lead or be on it and few wanting to get in behind so at least an even tempo suiting a closer.

7.A Proper Lady  has the ability to win an R65 race. She just needs a truly run race and should get that here with plenty of leaders and on pace runners. She can get a bit keen when they back off but that is unlikely to happen a lot in this. Leith Innes knows her well and drawn to get the right run about 5th or 6th and be a decent eachway chance. RP $5, $8FF

8.Highlighter  won her maiden well and should land near the pace. Ran Showaroses close and she has gone on to bigger things.

1.Castani  drops back in class with the side winkers going on. Tempo will suit him.

3.Vasquez  will likely try and lead and back off but is unlikely to get a soft time.

2.Sword Of State  got home strongly late here last start to win well. He would have improved nicely off that too. Drawn to get every chance and be the one to beat. RP $2.80, $2.80 FF

1.On The Bubbles  won the KM well but the time and strength of the field was below average. So after a few weeks break, and where he will have to do extra work at some stage, he is no $1.90 chance.

The speed map shows good speed out wide and a moderate to even tempo likely.

Confidence: 1/5 with a few chances.

9.Brahma Sunset  fresh up reared and got back but charged home. He was a notable drifter in the last 5 minutes of betting indicvating he may have needed that. he won easily second up last campaign leading all the way at Taupo over 1400m in faster time than the R72 race. Drawn wide but maps to lead if he begin cleaner. RP $3.80, $4 FF

6.Harbourside  ran home nicely late fresh up and 1400m suits with 2kgs off.

The speed map shows early speed from four runners ensuring an even tempo suiting all runners.

Confidence: 1/5 in an open race with many using it as a tune up for bigger races Ellerslie and other places.

3.Summer Heights  will be on speed and if they back off, her lack of race fitness may not be enough to negate her chances of winning. Tough mare. RP $5

15.Loire  is ready to go fresh after an impressive trial win. Wiil get back but if they go hard enough, which is likely, she could get over them wide out.

9.Lady Rudolph  goes well fresh and should get the right run to cause an upset.

1.Concert Hall  rates clearly on top but will need this with the Bonecrusher in mind next up.

5.Coventina Bay is rating better and better with each run. Maps to get back on the inner and likely to need the run so two strong negatives on a tight track making $4.40 hard to take.

The speed map shows Bonny Lass leading with a few looking to get in behind her.

4.Bonny Lass  was impressive on debut running better time than than R65 and maiden fields. She gets her head down nicely and wants to race, so if she can lead and back off a bit, she is going to be hard to run down. RP $2.40, $2.60 FF

9.Novashow  ran a good third on debut after beginning well then snagging and fought well for third. She looked to be travelling really well 500m out but the heavy ground didn’t allow him to let down properly. Drawn to get a good run and could upset.

The speed map shows Camino Rocosso likely to lead easily and with most being off pace runners, may get a decent break on many of them. 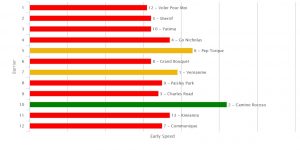 2.Camino Rocosso  ran a top 3rd at New Plymouth over 2000m when leading and the saddle slipped so did well to hold on for third. Then at Te Rapa he just missed it a stride and got back or was ridden back intentionally. He worked up 600m out but battled 250mk out in Group 1 company. This time he has drawn pout so should have the room to recover from a tardy start and get round and lead. If he can get a decent break on them by the last turn, he is going to be hard to run down.  RP $5, $8.50 Ff

1.Vernanme  won well last start and should land 2nd or 3rd . From there, should get his chance to run down Camino Rocosso but is 1kg worse off in the weights this time.

4.Go Nicholas ran home well late at new Plymouth behind the above two.

9.Paisly Park  was 4th behind the top two.

The speed map shows an even tempo with Torque Time and Trigon Lad and a few other looking to be on pace.

1.Amano  rates on top here after a strong 4th in a $100k Open handicap at Ellerslie then an unlucky second last start at Te Rapa. Maps to settle last inner which is a negative here but there looks to be enough tempo for him to get over these. 2kgs of helps as well. RP $2.80, $3 FF

11.Tuppence  relished the better surface last start and did well to win after working midrace. Should be in the right spot to strike again. Nice galloper.

2.Dance Card will find this easier after racing ok in stronger fields.

The speed map shows Quiz Kid likely to slide over and lead with Aquila Star content to trail as she did last start. 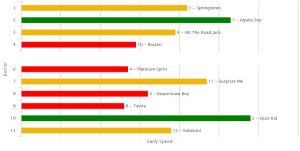 2.Quiz Kid ran a top third at Te Rapa when 3rd over 2100m in good time. Then won strongly off the front at Waverley over 2200m. Second up last start he looked very strong and fit before the race and relished his work in front over the 1600m and won easily in the end in a good speed rating. Should lead again and likely to do his own thing which is ideal with a front runner. The negative is the jump from 1600m to 2100m third up – he bolted in fourth up last campaign over 1800m and being stronger now, will take some running down. RP $3.70, $4.80 FF

1.Springstein  won well last start up to a middle distance and will get a cosy run. Needs to get out and going early and may not of Quiz Kid stacks them.

7.Irish Odds is a nice galloper and with 3kgs off from a good draw, is a nice eachway chance. RP $4.50

1.Tavattack  is a nice galloper and just needs a good ride from the wide draw.

3 and 2 worth including in quaddies.

The speedmap shows Deerfield getting the lead with Callsign Mav likely to want the trail or 2nd outer early. Avantage should look to go forward again and get 2nd outer with maybe Callsign Mav looking to track her in the 1×1. A Moderate tempo likely.

4.Avantage  beat Callsign Mav by 3.5L last start and he had every chance to run her down. Up to 1600m should suit her just as well and with a soft run near the pace likely, it is hard to see her beaten. Won this last year against a stronger field. RP $1.40, $1.25 FF

1.Callsign Mav ran home in the fastest last 200m of the day  behind Avantage. If he can get every chance on her back and be closer to her on the turn, he may give her a fright.

2.Deerfield  is likely to get a softish lead and based on his Trentham 3rd behind Melody Belle over this distance, he can run a place.

The speed map shows three runners looking to lead or be on it with a few all over looking to get handy. A moderate to even tempo likely.

4.Credit Manager  won his second race here beating a handy field. Since then he has always looked  a progressive type and has won twice since. Last start, after having two runs in richer company, he ran ok but needed the runs. Last start he drew wide, stumbled on jumping and got back and they ended up walking in front ( 26.3 off the front for the first 400m ). He was full of running on the turn but was held up but once out powered up nicely with a couple of gears up his sleeve as he had no chance of beating the first two who shared the walk in the park up front. His closing sectionals were the fastest of the day by far. This time he has drawn better and he does have the early speed to land in the first six behind a moderate to even tempo. With the 3kgs off, he looks very well placed to win. RP $2.00, $3.50 FF