Posted by: Neil Davis in Results, Selections March 17, 2021 Comments Off on Wednesday 17 March preview below 612 Views

Rail out 6m and a Dead 5 with a fine day forecast.

The speed map shows good speed from 4 runners and not a lot in behind so a moderate to even tempo likely suiting runners in the first half of the race.

3.Radegast is a nice horse and should land 3 back inner and with a couple of stablemates ahead of him, should be able to get a clear go after turning in. From there he has the finishing burst to get over these. RP $4

1.Lucky Shark  was just run down last start after leading and has drawn to lead again or trail.

Confidence:1/5 in a tricky dash with a few chances.

3.Heza Showman  looked good winning his trial left handed at Rotorua when he bounced well to lead and was too strong in a good time. On debut he drew out and jumped well again but was caught wide and got his tongue over the bit and naturally faded out. He looks better left handed and the tongue tie goes on. So if he can jump well again hew could get 2nd outer or even lead and is a decent eachway chance at good odds. RP $9, $17 FF

10.Isla Jay 2nd $3 on debut showed good early speed to lead and was taken on. She hung wide on the turn and fought well for third behind a nice filly. Back to 1050m will suit left handed.

1.Dragon Biscuit 1st $2.50  had the tongue tie go on three starts back and has raced much better ever since. His last two runs are behind the top 2yo Sword Of State in good time. He drops back to a weaker maiden 2yo race and has drawn to lead. From there, he does look hard to beat. RP $3.00, $3.60 FF

3.Cheerful Moment  ran a distant third to Sword Of State, who is the benchmark for 2yos, but looked a bit one paced and will likely need more ground.

The speed map shows three runners wanting to lead and a few looking to get in behind them. An even tempo likely suiting all runners. 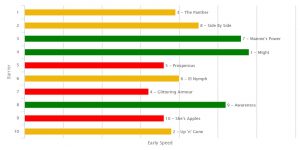 5.Prosperous won very well on debut at Avondale then went on to good form in the South Island. Before her debut win she finished 5th but has a lot to offer. In her recent trial at Rotorua she had a similar trial where she was allowed to settle back and wasn’t touched to run last. There looks to be good tempo in this so she maps to settle back and and can swamp them late. RP $5, $9

8.Side By Side 1st $6  has drawn ideally to settle about 5th or 6th and get the right run. Unlucky last start when held up.

7.Mannie’s Power 3rd $4.40  led early last start but was beaten for early speed by fast horses and settled midfield. This time can lead and if left alone, could pinch it. with 2kgs off his back.

3.The Panther  2nd   just held on when winning last over 1100m. Drawn ideally but this will be run at a decent tempo so he may be vulnerable late.

3.Side Hustle looked very good winning her trial here coming from 4th inner and galloping home near the rail with a good action to win it. Then on debut, she got back over 1200m and really showed that same turn of foot flashing home for second to the good horse Captain Tom in the best closing sectionals in all categories. She steps to 1400m in a Bonus race and looks well placed to settle midfield and get over these in the last 50 metres. RP $2.50, $3.20 FF

3.Weowna Tiger ran second to Vasquez on debut which is good form. Then last start had a good run and was a bit flat battling for fifth over 1200m. The step to 1400 with a freshener looks ideal and should get a good run.

2.Like A Boss  did well to run second off a wide run in the open here two starts back. Drawn to get all favours.

1.Aronov  two strong seconds before losing a show last start so can be forgiven for that.

The speed map shows maybe Superhoof leading with the side winkers going on but they have been looking to take a sit in his last two starts. A Moderate tempo likely.

Confidence: 2/5 in a tricky field.

1.Polzeath ran a strong fifth two starts back in a stronger field rating an FR 111 which is 5 lengths better than any of these have done in their last two starts. Didn’t fire at Ellerslie last start but drops back to a weaker Open handicap here and gets 2kgs off. He is best ridden forward and this looks like he can do that here so is a reasonable eachway chance at the odds. RP $5, $8 FF

2.Superhoof if ridden out to lead ( and could be with the side winkers going on)  should get it his own way in front and will be hard to run down if he does.

3.Felaar  has the visor Blinkers going on and drawn to get all favours with Danielle up.

7.Might Connor  was well ridden to win here last start. This is harder but drawn to get a good run again.

12.Primo  Stella in the stronger Lowland Stakes at Hastings last start was a clear last with 600m to go and was doing her best work late running the third fastest last 200m. If she can land closer from the good draw, she has to be in this. Nice looking filly. RP $4.80, $6.50 FF

1.Hit The Road Jack rated very well in a much stronger field last start and has to be further improved by that. So dropping back to an average midweek maiden field does make him well placed. Drawn out so needs luck for the first 600 metres

10.Charmingaffair  very good third last start off a wide draw and working hard. Drawn to get a good run and peaking fourth up.