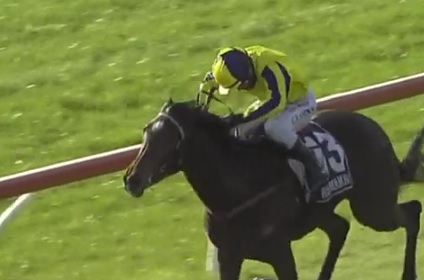 Race 2 . Sympathique $1.75 to beat  Qiji Swordsman. maps to be 2nd outer or leading on a soft tempo and Qiji Swordsman 6th outer about 4 lengths off her at the turn. With a good chance of a sprint home and a 3.5kgs advantage in the weights, it is hard to see QS getting past Sympathique. Yes

Race 5 Jimmy Five $1.75 to beat The Buffer. Jimmy maps to either lead or get the trail with no other obvious pace in the race, The Buffer will very likely snag from the wide draw as he is best over more ground and use this as a nice clean out for future runs. So Jimmy with the blinkers on and getting a few lengths on The Buffer on the turn in a sprint home, should be able to beat him home. Yes

The weather forecast is a bit bleak but less than 1mm is forecast to fall during the day which usually helps the track here.

Value bet of the Day Race 6 14.Mini Miner $5 FF 5th after jumping at the start

5.Eva James 1st $2.20 tri $13   looked good last campaign but always looked as though she would improve with time. She showed she had when trailing at Ellerslie leading all the way and won easing down. She looks stronger and ready to fire fresh up. She goes well on the fresh side as well. Drawn to hunt out and lead and hard to see the stablemates taking her on, so she can dictate and win. Any rain is ok. RP $2, $1.95 FF

2.Zelinksi  2nd $1.40 $looked good winning his trial at Ellerslie leading all of the way. But liklely to sit outside his stablemate, Eva James here , and his long strides are better suited to a solidly run race, not a sit sprint which this is likely to be.

3.Gigilo George  3rd NTD  won in faster time than Eva James on the same day last campaign. Then bled next up. She hasn’t trialed since so is likely to be ridden with a quiet sit and not be pushed because of the bleeding issue.

5.Sympathique 1st $3.20 led all the way here in January 2020 in an official time of 1.33.45 but it was actually 1.36.97 but she did show good fighting qualities and did so again when leading and was run down late by Laurant here over 1400m. Last start she stepped to 2100m, began well and got  a bit keen with the slower tempo 3rd outer, got pocketed 300m out and when out fought on strongly for a distant third. When she ran second here behind Laurant was back at the jump and wide and used petrol up to get 2nd outer sharing a good tempo. She was run down over the last 50 metres. This time, she maps to get a soft sit outside Savappiel and could kick on these and be the one to catch in a sprint home. RP $3.20, $3.60 FF

2.Laurant fresh up started in an R74 race at Ellerslie, much harder than this. She was a bit awkwardly away and got back but ran on well widest in the straight. That would have cleaned her up nicely.

6.Savappiel – her only placing was at Tauranga in an average maiden. Caught wide fresh up and faded out but was at big odds. Drawn to lead but should be covered by at least 3 runners here.

The speed map shows Ziegfeld leading out with Copy That the only one likely to make her work for it. A Moderate tempo likely.

8.Ziegfeld 1st $3.50 even though she has drawn wide she showed enough early speed in her trial to cross and lead or sit outside Copy That and a moderate tempo is likely. The way she kicked back and won her trial strongly in the second fastest heat time, showed she has the ability to at least win a maiden 2yo and with the bonus up for grabs, will be ready. RP $3, $4 FF

6.Cool Change  hasn’t got a lot of early speed but drawn 1 here and the stablemate Copy That may try and lead early giving him the trail if he can muster enough from the inside. If he does, based on his last unlucky run, he looks the main danger.

2.Copy That did too much work 3 wide on a decent tempo and only tired in the last 150 metres. If he can get a soft lead will make things interesting.

Confidence:1/5 in a tricky race

7.Dottie Dee 2nd =  ran in Listed and a Group race in Australia and has a rating of 63 after a placing in that Listed race on debut. She looked very good winning her trail at Rotorua sitting wide on the pace and won easing down. Then fresh up was caught wide with cover, got knocked around a bit and didn’t finish off. Looks better than that and with Leith Innnes jumping on, she will get every chance. RP $4, $3.30 FF

10.Zaffiro Belle was held up 3 back on the fence last start and ran home well for 4th in 11.45, good going in the context of the day. Drawn to get a good run and be right in this.

9.Aunt Cindy solid third here and close second at Ellerslie. Drawn well and back here has to be right in it.

8.Rubyshowoff was run down late last start after leading in the slowest of the 3 x 1200m races. Drawn wide here so she will have to work hard to get handy or snag. Her previous form was on a wet track and her action says that is what she needs to be backed with any confidence.

The speed map shows a lack of any leader, so riders will know that and one or two may hunt out and look for it. A slow to moderate tempo is likely.

4.Jimmy Five 3rd $1.60  has been freshened up and the blinkers go back on. He usually begins well and from the inside draw is very likely to lead or take a trail behind anything that hunts out quickly. He won strongly from that position at Tauranga and can do it again. RP $4, $5 FF

3,Fighting Fire 1st $2.50 may just be that runner that hunts out from a wide draw as he led in his recent trial and won easily although the others weren’t really pushed. Drawn wide here but with a clean beginning, could hunt to the lead and dictate with Craig Grylls up.

6.Lord Pelonius goes best here and drawn to land close enough to be in a winning position.

2.Playsameanpinball 2nd $3 is a nice horse that had a quiet trial. Probably suited to more ground but with the right run is capable of upsetting.

14.Mini Miner was unlucky last start when held up when having a bit to offer. In her recent trial she jumped well but eased back to 6th outer. Came widest on the turn and ran on very nicely without being pushed for a close second to Felicienne who was pushed out to win and ran a close second on debut. Drawn to get all favours in the trail and set to win fresh up. RP $3.50, $5 FF

13.Igottadoitmyway 1st $5.30   looked good speeding to the lead and galloped strongly down the straight to win her trial. Slowish time but nice looking galloper. Drawn well with 3kgs off with Eilish McCall on who rode her to win that trial. $90k purchase who has the breeding to win at least a maiden.

1.Marching On Tavi has been rating ok in stronger maiden fields. Drawn to get a good run and gets his chance.

3.Boomer Hill  has rated the best in this field but has a wide draw to overcome.

7.Vistock  does look the obvious one after so many close calls. Strikes the right field to win now. RP $2.50

9.Allbright ran a strong second here on debut over 1600m and a repeat of that run would make her hard to beat.

1.Outage  just run down last start. Same tactics here could see a win if the inside is ok and leaders are winning.

8.Pipsqueak Rose 1st $9  two solid placings before that duck egg last start. Can bounce back as she rates on top after weight adjustments in the Formpro Ratings.