Home » Results » Wednesday 12 May preview below 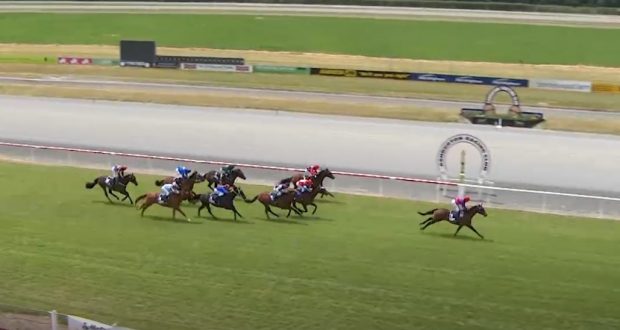 Wednesday 12 May preview below

Posted by: Neil Davis in Results, Selections May 12, 2021 Comments Off on Wednesday 12 May preview below 240 Views

Just three well placed runners today who should all get the race run to suit. I did have a couple more selections but they needed a Dead 5 or better track and with rain about till noonish, the Dead 6 track is likely to be a slow track by race time. Last week’s review of Te Rapa and Woodville can be seen here

Value bet of the day Race 1 4.Iffraajable $3.50 FF 5th after getting into a bad spot and held up

The speed map shows Kentucky Cougar likely to lead with Iffraajable content to settle behind him with Mistletoe coming across with a few wide looking to get handy. So a moderate to even tempo likely suiting runners in the first half of the running.

4.Iffraajable last start got back after beginning ok but it was a short run to the first bend, a bit like the Hastings 1600m start, and she got squeezed back. But kept up a sustained run to close hard for third in the best last 200m of the race. This time she has drawn near the inside, and with her usual beginning should land in the first four and get every chance being very fit and in form. Her action and breeding says any more rain will only help her chances. Rated Price ( RP )  $3, $3.50 FF

The speed map shows Mr Hass and Bealey Inn leading with six runners looking to get handy and debut runner, Ultimate, who raced very keenly in the lead in his trial and wide on the turn, ensuring an even tempo, maybe faster depending on what Ultimate does. 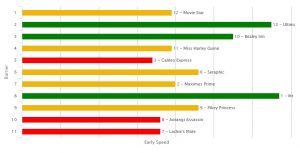 2.Maximus Prime  looked above average when winning his trial here powering away under his own steam to win going away in the fastest of the 5 heats including the Open Handicap.

Then on debut he got squeezed up early and was back on the fence off a moderate tempo ( first 600m in 36.47 off front  and home in 34.86 off front. But once he got clear, he showed that very good turn of foot to charge and almost get up. He had to run the fastest last 200m of 10.94 all day to do it. This time he has drawn ok and with a fair beginning he should settle around midfield and from there, with the likelihood of a decent tempo. I just can’t see anything good enough to hold him out. Dead to Slow track is fine with his action and his easy trial win was on a cutting out track. The extra 50m will also help. RP $1.80, $2.30 FF

The speed map shows debut runner, Lady Cora, who led in her trial but from an inside gate, maybe leading but may decide to snag from that wide draw. Kamenna and Elizabeth Rose have the speed to share the pace with Elizabeth Rose getting a good run on a moderate speed.

Confidence: 3/5 Suggested bet 3 units a win at $ 2.10 FF 2nd after wrongly snagging at the start when there was an obvious moderate tempo and ran a strong second.

2.Elizabeth Rose  rates 6 length clear of these after weight adjustments in the Formpro Ratings. That is due to her third behind Zoltan and Marine at Riccarton when leading and being run down over 1400m. The fifth to 9th horses have all since won out of that. Then she ran fourth in a stronger 3yo race at Riccarton again. In her recent trial she jumped first and was immediately restrained to 4th outer and ran on for third full of running without the blinkers on but with the nose band on to improve control. She should be wearing blinkers in this as she wore them at her last start and they have to notify if they are coming off for race day. Drawn out but with her tactical speed against a weak field, she should be able to press forward and get 2nd outer or ;lead and be too good for these. She ran second here on a slow 7 track so the conditions aren’t a concern. RP $1.80, $2.10 FF