Posted by: Neil Davis in Results, Selections May 13, 2021 Comments Off on Thursday preview below 335 Views

With the rail out 4 metres and with the track being a slow to heavy one, it always favours runners that have drawn out especially in the later races. The first three races over jumps will churn the track up as well, so the obvious approach is to find well placed runners that map to stay away from the inside in later races.

In June last year they raced here on a Slow 9 track with the rail out 2metres ( 4 metres today) and by race 8 of the 11 races they were coming to the centre and wider in the straight to win.

I’ve shied away from the early races as you just don’t know how the track will play. If they had an accurate track walker or Going Stick readings so we could judge for oursleves, it would give punters confidence to have an early bet but why would you risk it. The only choice is to wait until you can see any bias occurring and most of them will be working.

Bet of the Day Race 9 1.Black Forest $2.30 FF 1st $2.60 but almost blew it when he changed the whip back to the right side causing him to run in and into the slower ground!

The speed map shows three runners looking to lead and few looking to get handy so an even tempo. The inside is likely to be off so wider draws will be an advantage.

Confidence: 2/5 that one of the three below should take this out. Suggested bet the quaddie.

1.Geezas George  ran a good third last start in stronger R74 race and looks like 2060m will suit this very fit horse now. Gets 4kgs off so nicely placed. RP $4

6.Kusada travelled a long way last start and may have got float sick and the rider didn’t think he liked the better ground. Good tough win two back and is a nice horse.

9.Sovereign Express  had a 24 day break last start and will be improved by that. Won very well before then and Chris Johnson should suit her.

The speed map shows Golden Eagle leading a moderate tempo and about 6 runners looking to get handy. The inside is likely to be a no go zone by this race. 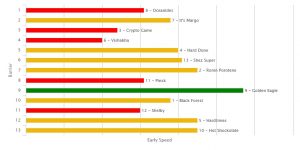 1.Black Forest on debut would have won easily if he was not held up twice in the running and still rated FR97, giving good weight to the winner. That rating would win most Saturday maidens.  He strikes a weak field here and only Vishakha and Oceanides look good enough to test him but they are likely to get back in the slower inner ground while Ryan Elliot will be able to keep on the outer of others from the draw and get to the better part of the straight. He looks a nice horse in the making and being Dummy Myers trained, will be spot on for this second up. RP $1.90, $2.30 FF

Confidence: 2/5 Suggested bet – hopefully still live in the quaddie but if not box the three up below in quinellas.

3.Transitory  won very well here over 1350m and last start charged home for second to a progressive horse in Volitivo ( also ran second here on a Slow 9 track . She maps to get the right run on the outer of others and her race fitness is a definite advantage over many here. RP $4.50

2.Tariq shied away from something in the straight ( may have been the seagulls in the straight) but was still good enough to win. he looks a progressive type and maps to get the right run with 1kg off.

12.Relda rates on top after weight adjustments in the Formpro ratings. Gets 3kgs off and drops back from a stronger R74 race. Handles a wet track well.

The speed map shows Red Rufus likely to lead but it just depends on how the track is playing. If they are staying away from the inside, which is likely, it will be a moderate tempo suiting runners in the first half on the outside of others. 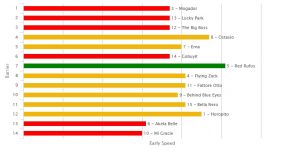 4.Flying Zack last start got back off a moderate tempo where they came home in the quickest last 600m of the day. So he did well to get up for third. Since then he trialed very well beating good mare Rosewood nicely. He won on debut here on a heavy 11 track and has drawn to stay away from the inside, so looks well placed. He has the early speed to land in the first six on the outside of others which looks the place to be. RP $3.80, $4.50 FF

3.Mogador  is a progressive horse and trainer Fraser Auret labeled him as the one to be on during the Weigh In show on Monday night. The negative is the inside draw though. He was beaten by it here last September when the outside was the place to be. It just depends on how strong the bias is by this last race. Ran third at the recent Levin Invisible Jumpouts.