Head to Heads Race 3 Fonteyn $1.55 to beat Diamond Delight. Fonteyn will be a few lengths ahead of DD on the turn and just looks a better filly. Yes

Te Rapa has some nice races on a Slow 8 track back in the true position after being out a fair way for the jumps races. It should  play fairly at least for the first four races. At Trentham there are a few favourites around $2 but do you really want to outlay your hard earned on those on a Trentham bog? I’m not as I’d just be using my luckiest pin if I did do any selections for there.

No Quality bets on a tough day with not enough value.

I’ll post an update by 11.30 a.m. with any Australian selections and Head to Heads.

Apologies no Heads Up this week, back again next Friday.

The speed map shows plenty of early speed ensuring at least an even tempo suiting all runners.

2.Riverplate looked good in his last trial where he jumped well and sat 2nd outer, then once balanced in the straight extended strongly with an ideal wet track action to win well in good time. Drawn to get all favours and a wet track won’t be an excuse. Andrew Campbell gets them ready on debut and if the money comes for him he is a decent chance but if he drifts markedly in the last couple of minutes, he is unlikely to win. RP $3.80, $4 FF

The speed map shows four runners going forward early to get the lead or be on it ensuring an even tempo suiting all runners. 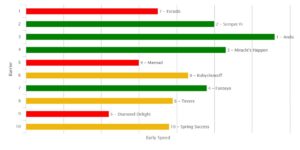 4.Fonteyn 2nd $1.40  is a very good filly as she has shown in her last three starts winning two of them and last start drove hard late in a strong speed rating for second. Drawn out but has the early speed to slot in 4th or 5th outer and with the nice weight for the highest rated horse, she looks well placed to win again. RP $2.50, $2.70 FF

6.Tevere  looked good beating a weaker field here when ridden colder. She should like the step to 1400m and the good tempo but Fonteyn should have a decent break on her on the turn and that should be the difference with her race experience and what she has done so far.

The speed map shows a moderate tempo suiting runners in the first half of the field.

2.The Bounder  did very well fresh up when 3 wide in the open and just went down to the winner running the third best last 600m. I’ve always liked this fella and from the draw he will get every chance and Erin Leighton, with 3kgs off, has been getting them home when she can easily position them from good draws. RP $4.50, $6.50 FF

The speed map shows three runners with early speed and a moderate to even tempo likely. How the track is playing may influence the result as well.

8.Yamuna won very impressively last start. The way she extended over that last 100 metres was outstanding and the sectionals back it up. her last 200m of 11.65 was slightly better than London Express’s who won the Open sprint over 1200. So to run a quicker last 200m after travelling 200m more to the 200m mark, shows she just needs the right run up in grade to back to back. The map isn’t the best for her but if they are coming to the centre of the track to win by this race, she will get her chance. She beat race rivals Cherry lane and Crafty jess here last September over 1600m. RP $4.70, $6 FF

3.Crafty Jess  is the course specialist of the field and drawn to get a winning run.

4.Lilly Thunder  did very well to win at Ellerslie and is right at the peak of her form.

The speed map shows good early speed from a few out wider and a bit closer in so should be fast early and even from there, maybe suiting an off pace runner. How the track is playing will also influence the result.

4.Covenant looked very good winning at Ellerslie last start and the way he bolted in and his last 400 and 200m was the fastest of the race, and virtually untouched with the whip by Opie, shows that he can progress further. Drawn to slide over and get a good run depending on how the track is playing. He’s a nice looking galloper too. RP $3.50, $3.80 FF

3.Pablo Esk  1st $8 good run at Trentham and blinkers go on at the right time.

1.Equinox  gets 3kgs off and if the inside is off, that will help his chances.

The speed map ( Friday 1 p.m. before scratchings)  shows good early speed across the field ensuring an even tempo.

8.Gerda goes well fresh which she showed when winning an R65 over 1400m very well at Hawera. The time was faster than the WFA race run by Supreme Heights the same day as well. Raced by a team from BOYS GET PAID led by the GOAT so listen out for them when she looms 100 metres out! RP $5, $7.50 FF

5,Metro Winner is a nice horse and will be ready to fire fresh. Definite upset chance.

2.He’s The Man looked good winning his maiden and looks a progressive type.

10.Our Fine Wine  saves her best for here.

The speed map shows no obvious pacemaker and despite the big field should suit runners in the first half or swoopers if the inside is off.

3.Henry Hudson  looks like  stayer and gets his chance to win on debut over more ground from a good draw.

13.Aspiring  was slow out last start and the rider was hobbling around before the start so it just wasn’t her day. Should have won here the start before. Can upset.

12.Renegade Fighter did well last start in a harder field. Fitter and if the inside is off, is an upset chance.