Posted by: Neil Davis in Results, Selections January 11, 2020 Comments Off on Sunday preview below 691 Views

The Goat’s multi of the weekend from heads Up was San Francisco, Baltimore, Kansas City Chiefs and Green Bay Packers all to win at home in a multi.

One Quality bet today. Race 5 2.Church Road $4FF with 3 units on him. I’ll post an update by noon.

Multi of the day

Confidence: 1/5 in a tricky race

3.Romantic Lady  just keeps on getting it done and in nice speed ratings. maps to get a good run in the trail and if she can get out in time, should be hard to beat with race fitness on her side. RP $4, $4.80 FF

2.Run To Perfection 1st $4.30  with a good run is the best horse in the race, and should be right in it. Likely to need this though.

1.Equinox  with a good run 2nd outer, should also be a chance.

4.Madam Hass  has won her two races well but this is a decent step up in class and is too short at $2.60 FF from a tricky draw.

The speed map shows Born Dragon being able to lead with his good early speed. Rock ‘N’ Affair can take a few strides to get going so is likely to settle 3rd or 4th first time this way round. Tempo likely to be even. Media Sensation

3.Rock ‘N’ Affair  won well last start. Can take a few strides to get going and first time right handed. But should land 3rd or 4th and be a chance from there.

1.Media Sensation was lost for early speed last start and didn’t fire. Drawn out with a big weight. Likely to snag and look  for a track into it. $2.60 is too short though.

4.Le Castille definitely looked like she would improve with her run at Tauranga. Drawn to get a good run and be in this.

The speed map shows four runners looking to be or be close to the lead early and Pimlico should be able to lead again and Amal Rose 2nd outer with Brahma Sunset looking to slot in with cover, as the trainer said he would like to see her ridden with cover before her last start win when she led all the way.  Hasstobegood maps to be 7th inner and may be caught out in a sprint home. 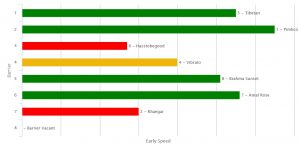 Confidence:2/5 where the tempo will decide the outcome.

5.Tibetan  ran a very good 3rd in the Wellington Stakes at Otaki alongside Scorpz. Then up to 2100m here last start closed hard to almost catch Scorpz. He gets his head down and relaxes well. Drawn the rail and has shown enough early speed to hold the trail behind stablemate Pimlico and I can see him getting out on the turn when Pimlico sprints and he could wear him down, so is fair chance to beat these. RP $4.50, $6.50 Ff

6.Hasstobegood  has looked good this campaign and her best run had to be last start when third, just alongside Harlech and Travelling Light, which has to be the best form you could get against these with them running 1-2 in the Levin Classic yesterday. However, after having a good look at all runners early speed and last few runs, she maps to be 7th inner and I can see them backing off midrace here which will make it harder for her, so the $2.30 is a bit short.

1.Pimlico 1st $4.30  got a soft lead last start and won well. He is a chance of getting a soft lead again and if he does, he is going to hard to run down.

8.Brahma Sunset  looked good out in front on the rail last start and won easily. Maps to be 4th outer and first time here is a query, but has good ability.

7.Amal Rose  fought on well to Pimlico last start for second. Hard to see her improving enough to beat him though even with the shadow roll going on.

2.Rhaegar  ridden off the pace last start with the blinkers off. battled ok in a sprint home. Will likely settle last outer and the better tempo will help. Hard to see improving enough to beat Hasstobegood though giving her 2kgs.

4.Vibrato slow out last start and didn’t do a lot after. Won on a heavy track in the slowest of 4 1230m races. Will appreciate the 1500m but looks covered by a few here.

The speed map shows early speed right across the field so being 2yos, it will just depend on how they jump and how they handle the early pressure as to where they land.

7.Dragon Queen  closed off strongly late here last start running the fastest last 200m of the race. She will be improved by that as well and with a good run, is a nice eachway chance. RP $5

1.Bordeaux Le Rouge  drawn to get all favours and be the one to run down.

10.Helsinki  drove home stylishly to win her trial. With a good run, could well do it.

6.Hasstobemagic two solid seconds but had her chance last start from a good draw. Drawn out so needs a good ride.

The speed map shows Church Road maybe leading as he has shown good early pace over shorter distances.  Firoden and Steven James should look to settle handy but there is not a lot of tempo here so it should suit on-pace runners.

2.Church Road won very well here two starts back over 1600m, then last start ran an excellent race when he got out well and led, then Riding The Wave came round and put strong tempo into the race. He led 300m out and was outfinished late and ran second. The speed rating was excellent and the rider, Masa, I think, thought he had the race won as he didn’t use the whip at all in the straight. The start before he did and he responded very well. The negative is he steps to 2100m for the first time, but he is rock hard fit, and is a big strong fella with a nice relaxed staying  action, and maps to either lead or sit outside it, and with not a lot of pressure likely, he is going to get every chance to kick near the turn, and with being a good left hand whip rider, should be able to keep him going right to the line and beat these. The 3kgs is also a significant factor with a good claimer. RP $2.60, $4 FF 3 units at $4

4.Steven James  battled on ok again for sixth last start in a stronger field. Maps to get a good run and be a place chance as he doesn’t win too often.

1.Lincoln King 1st $3.60   good run in a stronger field here last start but will get back but with the moderate tempo and giving weight to all, he has two negatives against him. He has had four runs with 59kgs or more and 6th, 11th, 11th and 3rd.

6.Scaglioni  ran a good third last start and with a good trip closer to the pace, looks the main danger.

The speed map shows Tiptronic and Highlad leading with All In Vogue coming across from wide out. A moderate tempo likely.

10.Intrigue looked very good last campaign on Dead or worse tracks. She won on a heavy track in Australia after winning impressively at Pukekohe. Drawn to land close to the pace and with a moderate tempo likely, will get her chance to beat these on a light weight. RP $4, $3.50

3.Roger That  was late scratched from the city Of Auckland cup. Drawn to get a good run with 3kgs off.

6.Felaar  with a good trip likely can get into it.

9.Azaboy  is going to appreciate the extra ground and can upset.

Confidence:2/5 in a tricky race

4.Gino Severini 1st $2  had every chance here last start with a soft sit 2nd outer and couldn’t quite do it. Some nice horses in here. It does help that he has drawn well and gets 3kgs oiff this time, but $1.95 is too short.

5.Raposa Rapida  was beaten by a wide draw last start in a strong field. Will likely look to lead and dictate and make it a sprint home if he can.

6.Cyber Attack  is finding the line like he is ready to win with the right run and from the inside draw, could get that run.

3.Crafty Jess  was an unlucky 4th here earlier and was caught wide last start.Drawn to get a good run with Opie up.

The speed map shows Krakadeel and Dawnlight going forward with Kiwianna and Ocean lad tucking in behind. A Moderate tempo is likely.

1.Foodie King almost got up here last start. maps to get an ideal run.

8.Playsameanpinball  is going to win a maiden and it maybe this one with a good run.

13.Sardonia  may be better this way round after a strong third here two back and not finishing it odd as well left handed next up.